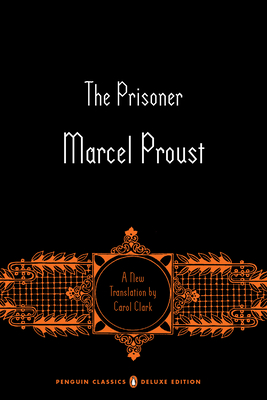 This is book number 5 in the In Search of Lost Time series.

A Penguin Classics Deluxe Edition, with flaps and deckle-edged paper

Carol Clark's acclaimed translation of The Prisoner introduces a new generation of American readers to the literary riches of Marcel Proust. The fifth volume in Penguin Classics' superb new edition of In Search of Lost Time--the first completely new translation of Proust's masterpiece since the 1920s--brings us a more comic and lucid prose than readers of English have previously been able to enjoy.

The titular "prisoner" is Albertine, the tall, dark orphan with whom Marcel had fallen in love at the end of Sodom and Gomorrah (volume 4). Albertine has moved in with Marcel in his family's apartment in Paris, where the pair have a seemingly limitless supply of money and are chaperoned only by Marcel's judgmental family servant, Françoise. Marcel, who worries obsessively about Albertine's relationships with other women, grows more and more irrational in his attempts to control her, keeping her prisoner in his apartment and buying her couture gowns, furs, and jewelry in an attempt to protect her from herself and from the outside world and. And yet in addition to being a tragedy of possessive love, The Prisoner is also a comedy of human folly and misunderstanding, linked to the other volumes of the larger novel through its themes of class differences, art, irrationality, social snobbery, and, of course, time and memory.

For more than seventy-five years, Penguin has been the leading publisher of classic literature in the English-speaking world. With more than 2,000 titles, Penguin Classics represents a global bookshelf of the best works throughout history and across genres and disciplines. Readers trust the series to provide authoritative texts enhanced by introductions and notes by distinguished scholars and contemporary authors, as well as up-to-date translations by award-winning translators.

Marcel Proust (1871-1922) was born in Auteuil, France. In his twenties, following a year in the army, he became a conspicuous society figure, frequenting the most fashionable Paris salons of the day. After 1899, however, his chronic asthma, the death of his parents, and his growing disillusionment with humanity caused him to lead an increasingly retired life. From 1907 on, he rarely emerged from his apartment on Boulevard Haussmann, where he wrote letters and devoted himself to the completion of In Search of Lost Time.

Carol Clark (translator; 1940-2015) was an emeritus fellow and tutor in French at Balliol College, Oxford. She translated selections from Baudelaire for Penguin Classics and authored several books on French literature.

Christopher Prendergast (general editor) is a professor emeritus of French literature at the University of Cambridge and a fellow of King's College.

“The new Penguin Proust offers English readers a stylistic experience that is a far better equivalent of the original than what they have had till now.” —The Times Literary Supplement

“Penguin’s polyphonic Proust takes you on [an] amazing voyage.” —The Independent (London)

“The latest Penguin Proust is a triumph, and will bring this inexhaustible artwork to new audiences throughout the English-speaking world.” —The Sunday Telegraph (London)