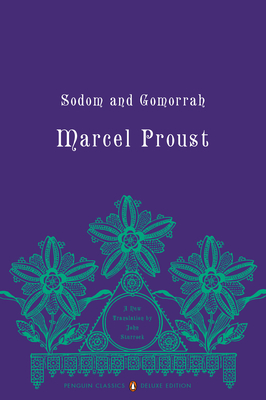 This is book number 4 in the In Search of Lost Time series.

John Sturrock's acclaimed new translation of Sodom and Gomorrah will introduce a new generation of American readers to the literary riches of Proust. The fourth volume in this superb edition of In Search of Lost Time—the first completely new translation of Proust's masterpiece since the 1920s—brings us a more comic and lucid prose than English readers have previously been able to enjoy.

Sodom and Gomorrah takes up the theme of homosexual love, male and female, and dwells on how destructive sexual jealousy can be for those who suffer it. Proust’s novel is also an unforgiving analysis of both the decadent high society of Paris and the rise of a philistine bourgeoisie that is on the way to supplanting it. Characters who had lesser roles in earlier volumes now reappear in a different light and take center stage, notably Albertine, with whom the narrator believes he is in love, and the insanely haughty Baron de Charlus.

John Sturrock (translator) is a writer and critic who has previously translated Victor Hugo, Stendhal, Rimbaud, and a volume of Proust's essays for Penguin Classics. He is a consulting editor at the London Review of Books.

"John Sturrock is pitch-perfect in Sodom and Gomorrah, equally at home with its intimacies and its bitter comedy...poetic." —The Irish Times