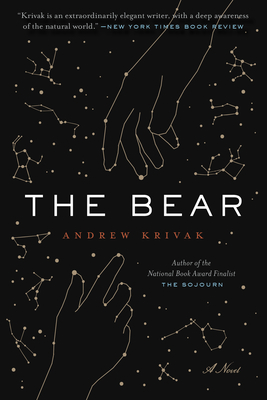 I love a book that promises to lead you in a certain direction, only to have it completely surprise you mid-way. The Bear did that for me – I thought I was reading a “straightforward” post-apocalyptic novel about a girl surviving alone in the wilderness… and it is that, for sure, but about 1/3 of the way in it pivots ever so slightly and becomes something much bigger, more beautiful, poignant, and magical. So incredibly magical! I loved and savored every single word of it – a book that by page count should’ve taken me a day to read, I spread out over a week, not wanting it to end. THAT’s what I’m talking about. -seth

ACCLAIMED, AWARD-WINNING AUTHOR: Marlon James has described Krivak's work as "incandescent," Jesmyn Ward lauds his "singular talent," and Mary Doria Russell calls him "a writer of rare and powerful elegance." Booksellers, who selected his first novel, The Sojourn, for the Indie Next List and Barnes & Noble Discover Great New Writers program, agreed and the novel went on to become a National Book Award finalist and winner of the Dayton Literary Peace Prize and Chautauqua Prize. Now Krivak returns to Bellevue Literary Press with a second novel filled with grace notes and epiphanic moments about coming of age during dark times--one that underscores the New York Times praise for Krivak as an author with a "deep awareness of the natural world" and Richard Russo's prediction that Krivak is "destined for great things."

UNLIKE ANYTHING YOU'VE READ BEFORE: A short list of authors Andrew Krivak has been compared to by critics includes Cormac McCarthy, Kent Haruf, Isaac Babel, Erich Maria Remarque, Ernest Hemingway, Joseph Heller, and William Faulkner, but in every instance these comparisons are followed up by the acknowledgement that Krivak has found a voice all his own. While The Bear contains all the emotional power of the best dystopian fiction, including Cormac McCarthy's The Road, it is not set in a sinister, post-apocalyptic world. Instead, Krivak embraces and celebrates the beauty of the natural world, spinning a deeply moving, spiritually astute myth that represents a new direction for storytelling and the way we imagine our future.

AN ENDURING BOOK FOR READERS OF ALL BACKGROUNDS: In the guise of a simply told, lyric fable where nature itself emerges as a character, The Bear elegantly reveals universal truths about the environment and humanity's place within it. It is a novel for anyone who has struggled to become self-reliant; for any parent wondering if they did the right thing bringing children into this world; for anyone who ever loved the wilderness and its creatures; for anyone who aches at the thought of the end of the world and longs for the hope of something better; for anyone seeking an adult title with the moral wisdom they found in the books they loved as children. As Krivak writes, "We don't know what the kiln of our becoming will be, but we should trust that if we've lived authentic lives we will endure." And surely, this extraordinarily beautiful novel will also endure.

Andrew Krivak is the author of three novels: The Bear; The Signal Flame, a Chautauqua Prize finalist; and The Sojourn, a National Book Award finalist and winner of both the Chautauqua Prize and Dayton Literary Peace Prize. He is also the author of A Long Retreat: In Search of a Religious Life, a memoir about his eight years in the Jesuit Order, and editor of The Letters of William Carlos Williams to Edgar Irving Williams, 1902-1912, which received the Louis L. Martz Prize. Krivak lives with his wife and three children in Somerville, Massachusetts, and Jaffrey, New Hampshire.