The Hidden Plague: A Field Guide For Surviving and Overcoming Hidradenitis Suppurativa (Hardcover) 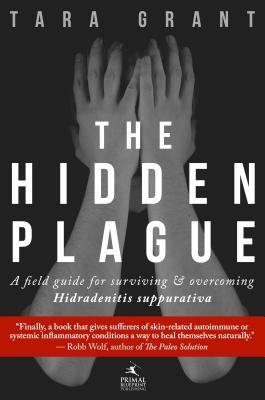 By Tara Grant
Email or call for price.
Out of Print

Have you been plagued with boils, cysts, ingrown hairs, and acne-like bumps that take months to resolve, leave embarrassing scars, and cause considerable pain? Have you been to the doctor, only to leave with a prescription for antibiotics, few answers, and little to no hope? Hidradenitis supprativa (HS) is a poorly understood skin condition that is believed to affect nearly twelve million people in the United States alone. Only a small fraction of those affected have been properly diagnosed, leaving many others to suffer in silence or pursue ill-advised conventional treatment methods that fail to address the cause of this painful condition.

Tara Grant, a twenty-year sufferer of HS, has become an underground legend to her Internet community of HS victims by presenting a methodical, self-tested action plan to heal naturally. The centerpiece of her holistic approach rests on the understanding that HS is an autoimmune disorder caused by leaky gut syndrome. With a few simple dietary changes that eliminate certain “trigger” foods, you can heal your gut, restore your skin, reclaim your health, and rid yourself of HS symptoms forever. That’s it—no antibiotics, no experimental surgeries, and no more pain, suffering, or confusion.

1. What was it about the subject you chose to write about in your book that made you feel so passionate about spreading the word and getting your book published?

My motivation for writing this book was the overwhelming response I received from people on the Internet when I originally posted about it in March of 2012. It turns out it’s a pretty common condition, but many people (and doctors) don’t know what it is. It’s pretty standard to visit various doctors, and be told that you have “acne,” or to be subjected to butchering surgeries. There is no treatment for HS, according to the doctors. People with it suffer immensely—in fact, HS is acknowledged to be one of most painful conditions in the world. I’ve even received letters from doctors and nurses who suffer from HS, thanking me for telling them what it is that they have—and for offering them hope.

The primary motivating factor for writing this book, however, was an email I received from a 12-year old girl, who said she was going to kill herself because of the pain she was in. I immediately wrote her back, but I never heard back from her. I am desperate to know that she’s okay. I don’t want anyone else to go through what I did as a teenager—I myself thought about suicide on more than one occasion. I’ve had many letters from people who say they want to kill themselves since.

2. HS is hard to diagnose, and many doctors aren’t even aware of its existence. How did you get a diagnosis?

I’ve had HS since I was thirteen years old, but wasn’t diagnosed until I was in my mid-30s. Up until then, I saw over forty doctors from four different countries - none of whom could tell me what was wrong with me. I eventually found the name “Hidradenitis suppurativa” in a book about PCOS (also known as polycystic ovarian syndrome, which I also had) and could finally put a name to the horrible condition I had suffered from for so long. I took that information to a dermatologist. That’s when I finally got a diagnosis—over twenty years later. At that time, I had already changed to a Primal diet and my HS was drastically better, so I declined the antibiotics and Accutane the doctor prescribed. I also refused to believe what she said: “You have to live with this for the rest of your life.” I knew, as a longtime sufferer of HS, that the doctors I had seen had no clue what they were talking about.

My journey was extremely frustrating, and I went through it completely alone. Over the years, I was told I had “adult acne,” and also told that they didn’t know what was wrong with me. I was also told that I was overreacting, not keeping clean enough, and told to lose weight. Not a single doctor showed any compassion, or was willing to look into the matter further. I eventually stopped going to the doctors, and didn’t return until I had already made changes and knew I was on the right track. I knew that if I wanted answers, I had to do the research and experimentation myself. I wasn't interested in how I reacted to different drug, I was interested in healing myself naturally.

I knew that I was on the right track with diet, so I started investigating Robb Wolf’s Autoimmune Paleo Protocol, and made specific tweaks for skin conditions. Results I had seen from others (Dr. Terry Wahls, for example) who had healed themselves from crippling autoimmune conditions were the only motivation I needed. When I started treating HS like an autoimmune condition, it went into remission. There are literally thousands of cases of this happening with different autoimmune conditions all over the world. I was also able to induce flare-ups with specific experimentation. This completely checks with autoimmunity. There isn’t a cure—you will always have the predisposition for autoimmunity—but you CAN go into remission.

3. Do you have any relatives or close friends that became diagnosed after you?

There is no one else in my family with this condition. There is a mistaken belief that HS is hereditary. It is not. However, some families have more than one member affected by it. The reason for this is that HS is autoimmune. In order to get an autoimmune condition, you need to have the gene for autoimmunity. The fact that the autoimmune gene manifests as HS in more than one family member is complete coincidence. If you’re suffering from HS, you more than likely have other autoimmune conditions - and so does your family. Family trees littered with Crohn’s, rheumatoid arthritis, multiple sclerosis, restless legs syndrome, diabetes, Lupus, endometriosis, eczema, psoriasis, HS, and more—all of which are autoimmune—are very common. If you have HS, you have the autoimmune gene, which you did inherit. If your gut becomes leaky, then you will eventually develop an autoimmune condition.

4. Do you have advice for anyone seeking medical help for this condition?

Read my book first. The Western medical community is still under the mistaken belief that HS is caused by bacteria, hence the prescriptions for antibiotics. They will not be able to help you, and will suggest butchering surgeries and heavy hitting drugs, which often make matters worse. You can’t “cut HS out,” like you do with a cancerous tumor. When you remove an organ or tissue that is being ravaged by an autoimmune response, you open up all your other organs and tissues to attack. That’s why there’s over an 80% chance of reoccurrence of HS after surgery, and people will often start flaring-up in areas that had been clear before. Sometimes, they even develop brand new autoimmune conditions. Luckily, you actually hold the key to healing in your hands. You can heal yourself. If you can avoid infection, then you don’t need doctors—or drugs— to help you go into remission.

5. What is the one thing you would stress most to anyone unable to get a copy of your book at this time?

Many people with HS are on disability and don’t have a lot of disposable income, or they have been taken advantage of in the past. If this is you, go to your local library and ask them to carry the book. Then, you can borrow it for free.

How much does a 1-oz jar of EmuAid cost? Turmeric capsules? Surgery? Doctor visits and prescriptions? We’ve all fallen for so much. I bet if you sat down and tallied up how much you’ve spent on Band-Aids alone for your HS over the years, $26 would be a drop in the bucket.

The great thing about this book is that if you are not satisfied, you can request your money back. If you get this 300-page manual and find that there is nothing in it that is of any help, you can ask for a refund from the publisher. Try asking for a refund for EmuAid when it doesn’t work. That being said, I would challenge anyone with HS to read this book and find nothing in it that’s helpful.

6. Your book is a very important first step in making the public aware of this illness. Besides the book, how do you plan to raise awareness of HS?

My goal is to get on the Dr. Oz show. I figure that will give us the biggest bang for the buck. Many people have HS, but are unaware of what it’s called. They’re too embarrassed to go to the doctor about it. I would encourage all of you to write to the Dr. Oz show and ask them to feature me, and ask your local library to carry the book. The only way we’re going to raise awareness is to GO BIG.

Tara Grant is a featured success story on MarksDailyApple.com (Tons of Doctors and No Solution) and in the Primal Blueprint 21-Day Total Body Transformation. She has transformed from 235 pounds to 159 pounds since going Primal in 2009. Tara suffered a litany of serious health problems related to the Standard American Diet and repeated failures of western medicine to cure her. Empowered by the reclaiming of her health, Tara has made it her mission to inform and inspire others about Primal living. Her motto, Empower. Enlighten. Evolve, has been put into play in numerous ways! Her book, The Hidden Plague -- A Comprehensive Guide to Surviving Hidradenitis Supprativa -- details her struggle with this debilitating skin condition, and how sufferers can take matters into the own hands and heal naturally. Tara is a veteran presenter of numerous PrimalCons, where she holds court detailing her Primal transformation from health to wellness. Tara is also a contributing writer for the Primal Blueprint Expert Certification program and is working with Carrie Sisson on her upcoming Primal Womanbook. A dynamic speaker, Tara presents the Primal Transformation Seminar in numerous cities, and counsels individuals as a certified CHEK Holistic Life Coach. Tara holds a degree in Journalism from Carleton University in Ottawa, Canada and blogs regularly. She currently lives in Phoenix, Arizona with her husband Derek and their twin boys, Taylor and Gibson.