Beyond the Bright Sea (Paperback) 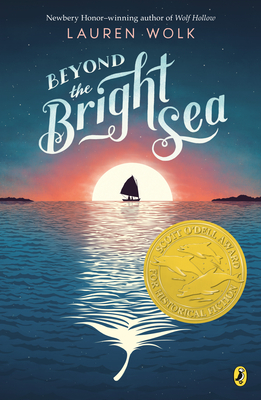 - Winner of the 2018 Scott O'Dell Award for Historical Fiction -

From the bestselling author of Echo Mountain and Newbery Honor–winner Wolf Hollow, Beyond the Bright Sea is an acclaimed best book of the year.

“The sight of a campfire on a distant island…proves the catalyst for a series of discoveries and events—some poignant, some frightening—that Ms. Wolk unfolds with uncommon grace.” –The Wall Street Journal
★ “Crow is a determined and dynamic heroine.” —Publishers Weekly
★ “Beautiful, evocative.” —Kirkus

The moving story of an orphan, determined to know her own history, who discovers the true meaning of family.

Twelve-year-old Crow has lived her entire life on a tiny, isolated piece of the starkly beautiful Elizabeth Islands in Massachusetts. Abandoned and set adrift in a small boat when she was just hours old, Crow’s only companions are Osh, the man who rescued and raised her, and Miss Maggie, their fierce and affectionate neighbor across the sandbar.

Crow has always been curious about the world around her, but it isn’t until the night a mysterious fire appears across the water that the unspoken question of her own history forms in her heart. Soon, an unstoppable chain of events is triggered, leading Crow down a path of discovery and danger.

Vivid and heart-wrenching, Lauren Wolk’s Beyond the Bright Sea is a gorgeously crafted and tensely paced tale that explores questions of identity, belonging, and the true meaning of family.

Lauren Wolk is an award-winning poet and author of the bestselling Newbery Honor–winning Wolf Hollow, described by the New York Times Book Review as "full of grace and stark, brutal beauty." She was born in Baltimore and has since lived in California, Rhode Island, Minnesota, Canada, and Ohio. She now lives with her family on Cape Cod.

“Be warned, once you pick up Beyond the Bright Sea, you won’t be able to put it down...Lauren Wolk's writing is at once lyrical and fraught with danger and suspense, as Crow follows her instincts to hunt down a past that has eluded her and face an unknown future.” – NPR’s Best Books of the Year

“The sight of a campfire on a distant island…proves the catalyst for a series of discoveries and events—some poignant, some frightening—that Ms. Wolk unfolds with uncommon grace.” –The Wall Street Journal

★ “Creating mystery and suspense in an unusual setting, Newbery Honor–winner Wolk spins an intriguing tale of an orphan determined to find her roots, set in the 1920s…. Crow is a determined and dynamic heroine with a strong intuition, who pieces together the puzzle of her past while making profound realizations about the definition of family.” —Publishers Weekly, starred review

★ “The mysteries—and the words that describe them—are compelling enough to send readers to the islands for years to come. A beautiful, evocative sophomore effort from Newbery honoree Wolk.” —Kirkus, starred review

★ “Wolk has a keen sense for the seaside landscape, skillfully mining the terror the ocean can unleash as a furious nor’easter heightens tension in the novel’s climax.” — Booklist, starred review

★ “A stellar story full of heart, action, and emotion that will make readers feel like they are a part of Crow’s family.” — School Library Journal, starred review

“[A] hauntingly beautiful sea song of a historical novel.... As Crow searches for clues to her origins, this soulful book turns into a riveting adventure.” — Scholastic Teacher

“A sweeping work self-discovery and love, Beyond the Bright Sea is thought-provoking and pitch-perfect in every way.” —The Times Herald

“This is the story of a girl trying to discover who she is and who she wants to be, but it is also a fast-paced thriller with kidnapping and buried treasure, a murderous escaped convict, and a shipwreck. Crow, Osh and Miss Maggie are wonderful characters, quirky and lovable and real. The lessons Crow learns about people and herself are profound. The sea crashes, and the smell of salt and fish and ocean spray will make you feel drenched as you read. The writing is fabulous.”  — Historical Novel Society

“The honesty of Wolf Hollow will just about shred your heart, but Annabelle’s courage and compassion will restore it to you, fuller than before. This book matters.” —Sara Pennypacker, New York Times bestselling author of Pax

“An evocative setting, memorable characters, a searing story: Wolf Hollow has stayed with me long after I closed the book. It has the feel of an instant classic." —Linda Sue Park, Newbery Medalist and New York Times bestselling author

"Wrenching and true. . . . comparisons to Harper Lee's To Kill a Mockingbird will abound. But Wolk gives us her own story—one full of grace and stark, brutal beauty." —The New York Times Book Review

★ "Perfectly pitched to be used in classrooms in conjunction with To Kill a Mockingbird.” —Booklist, starred review

★ "The tension builds and never lets up." —The Horn Book, starred review