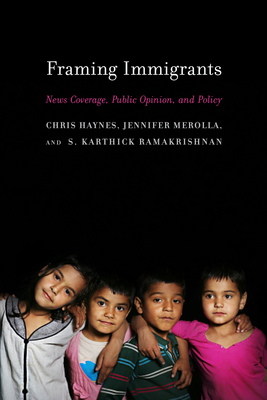 While undocumented immigration is controversial, the general public is largely unfamiliar with the particulars of immigration policy. Given that public opinion on the topic is malleable, to what extent do mass media shape the public debate on immigration? In Framing Immigrants, political scientists Chris Haynes, Jennifer Merolla, and Karthick Ramakrishnan explore how conservative, liberal, and mainstream news outlets frame and discuss undocumented immigrants. Drawing from original voter surveys, they show that how the media frames immigration has significant consequences for public opinion and has implications for the passage of new immigration policies.

The authors analyze media coverage of several key immigration policy issues—including mass deportations, comprehensive immigration reform, and measures focused on immigrant children, such as the DREAM Act—to chart how news sources across the ideological spectrum produce specific “frames” for the immigration debate. In the past few years, liberal and mainstream outlets have tended to frame immigrants lacking legal status as “undocumented” (rather than “illegal”) and to approach the topic of legalization through human-interest stories, often mentioning children. Conservative outlets, on the other hand, tend to discuss legalization using impersonal statistics and invoking the rule of law. Yet, regardless of the media’s ideological positions, the authors’ surveys show that “negative” frames more strongly influence public support for different immigration policies than do positive frames. For instance, survey participants who were exposed to language portraying immigrants as law-breakers seeking “amnesty” tended to oppose legalization measures. At the same time, support for legalization was higher when participants were exposed to language referring to immigrants living in the United States for a decade or more.

Framing Immigrants shows that despite heated debates on immigration across the political aisle, the general public has yet to form a consistent position on undocumented immigrants. By analyzing how the media influences public opinion, this book provides a valuable resource for immigration advocates, policymakers, and researchers.

“Immigration is a topic that frequently frustrates social scientists: we revere careful data analysis but such analysis seems to have little impact on popular perspectives and public policy. Along comes this gem of a volume to help us understand why: frames matter as much as facts. Drawing on a wealth of research as well as their own analysis of media content and opinion surveys, the authors offer a remarkably nuanced view of the cues and wordings that shift public attitudes to be more or less favorably disposed to immigrants and immigration reform. With results that are sometimes surprising but always informative, Framing Immigrants will be required reading for anyone hoping to break through America’s immigration policy stalemate.”

—MANUEL PASTOR, professor of sociology, American studies, and ethnicity and director, Center for the Study of Immigrant Integration, University of Southern California

“Immigration and immigrants are topics about which many people have strong opinions paired with misinformation or no knowledge. Thus media framing can have an outsize impact, for both good and ill. Chris Haynes, Jennifer Merolla, and Karthick Ramakrishnan do a terrific job of sorting out what impact the media have on the politics of immigration, when, how, why, and to what effect. An exemplary piece of research.”

“Framing Immigrants delivers an authoritative account of the power of frames. Combining content analysis of news coverage with original survey experiments, the authors show that not only do frames differ starkly across news organizations in ways that reveal their political stripes, but also that frames matter. The ways in which the media frames immigrants—and especially unauthorized immigrants—significantly affects public opinion, preferences, support for the Dream Act, the deportation of unauthorized immigrants, and comprehensive immigration reform. Chris Haynes, Jennifer Merolla, and Karthick Ramakrishnan take the readers along a compelling and surprising journey, and provide a rich, interdisciplinary resource that will inspire future generations of immigration researchers.”