A Series of Unfortunate Events #5: The Austere Academy (Hardcover) 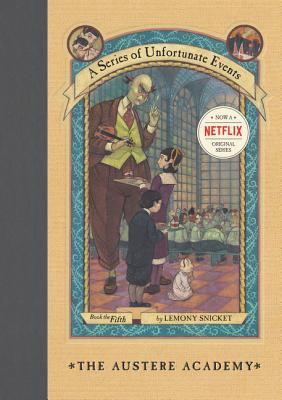 This is book number 5 in the A Series of Unfortunate Events series.

As the three Baudelaire orphans warily approach their new home Prufrock Preparatory School, they can't help but notice the enormous stone arch bearing the school's motto Memento Mori or "Remember you will die."

This is not a cheerful greeting and certainly marks an inauspicious beginning to a very bleak story just as we have come to expect from Lemony Snicket's A Series of Unfortunate Events, the deliciously morbid set of books that began with The Bad Beginning and only got worse.