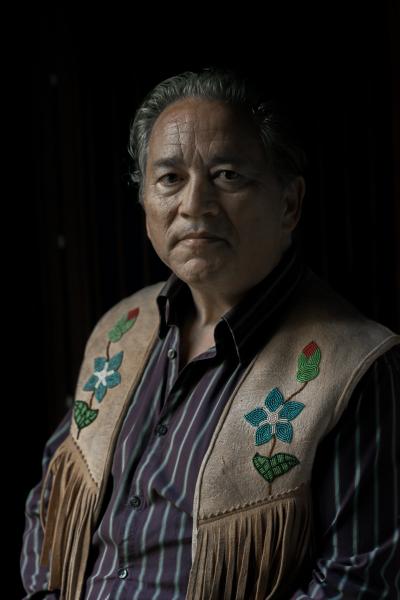 The Book Catapult is proud to host Darrel J. McLeod in a virtual event for his new memoir, Peyakow on Tuesday, August 10 at 6pm on ZOOM. Darrel will be in-conversation with local author Kazim Ali.

In Mamaskatch, McLeod captured an early childhood full of the stories, scents, and sensations of his great-grandfather’s cabin, as well as the devastating separation from family, ensuing abuse, and eventual loss of his mother that permeated his adolescence. In the equally potent Peyakow, McLeod follows a young man through many seasons of his life, navigating an ever-turbulent personal and political landscape filled with loss, love, addiction, and perseverance. Guided internally by his deep connection to his late grandfather, in a constant quest for happiness, McLeod strives to improve his own life as well as the lives of Indigenous peoples in Canada and beyond. This leads him to a multifaceted career and life as a school principal, chief treaty negotiator, executive director of education and international affairs, representative of an Indigenous delegation to the United Nations in Geneva, jazz musician, and, today, celebrated author. Weaving together the past and the present through powerful, linked chapters, McLeod confronts how both the personal traumas of his youth and the historical traumas of his ancestral line impact the trajectory of his life. With unwavering and heart-wrenching honesty, Peyakow—Cree for “one who walks alone”—recounts how one man carries the spirit of his family through the lifelong process of healing.

Darrel J. McLeod is the author of Peyakow and Mamaskatch, which received the Govenor General’s Literary Award for Nonfiction. He is Cree from treaty eight territory in Northern Alberta. Before deciding to pursue writing in his retirement, McLeod was a chief negotiator of land claims for the federal government and executive director of education and international affairs with the Assembly of First Nations. He holds degrees in French literature and education from the University of British Columbia. He lives in Sooke, British Columbia.

Kazim Ali is the author of Northern Light: Power, Land, and the Memory of Water, as well as several volumes of poetry, novels, essay collections, and cross-genre texts. His collections of poetry include Sky Ward, winner of the Ohioana Book Award in Poetry, and The Far Mosque, winner of Alice James Books’ New England/New York Award. Ali is also an accomplished translator and the editor of several anthologies and books of criticism. He has taught at various colleges and universities, including Oberlin College, Davidson College, St. Mary’s College of California, and Naropa University. He is currently a professor of Literature and Writing at the University of California, San Diego.

Tokyo Ueno Station
by Yu Miri
Get 20% off the pick until Thursday, August 12