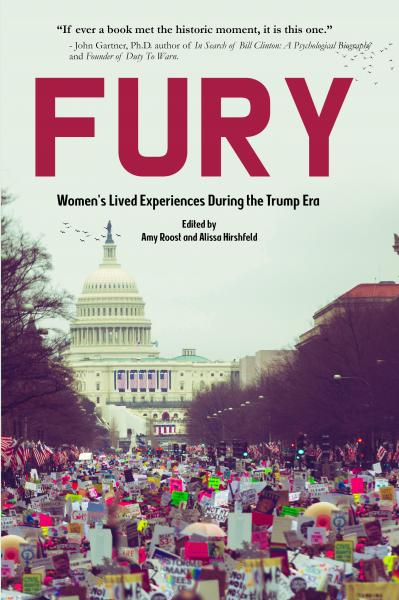 The Book Catapult will host Amy Roost, editor of Fury: Women's Lived Experiences During the Trump Era along with contributors Jennifer Redmond and Lorraine Camenzuli on Tuesday, March 24 at 7:30pm.

Donald Trump is an affront to the entire feminine ethos of caring. He is the ultimate self-aggrandizing, toxic male who will always act on his own behalf. This is his pathology.  And by extension, he is a public health danger to women, emotionally. Fury: Women’s Lived Experiences During the Trump Era brings together a diverse community of women who reveal the impact Donald Trump’s behavior, words, and presidency has had on each one of them, how each is confronting the problem, and how she is fighting back.

Most readers will identify with more than one of these powerfully authentic and revealing personal essays representing a refreshingly broad representation of viewpoints. And that is exactly why Fury matters: it will help the reader feel less alone, work through some of their own hurt and pain, and formulate a plan for what they can do to bring about an end to the Trump presidency. Fury is a cohesive narrative of the times we live in, and chronicles a unique chapter in history for the edification of generations of women and allies to follow.

"These are thunderbolts thrown at the ultimate lightning rod in a cultural struggle that goes back to the dawn of human civilization. If only Donald Trump were just a metaphor, or justifiable outrage able to sway willful ignorance. A treat to meet these women in their fury." -John Sayles, filmaker & novelist