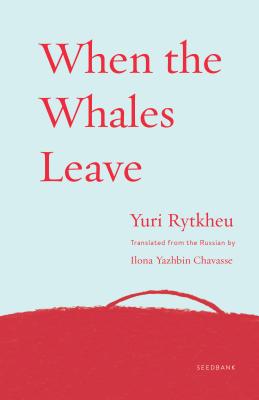 The next meeting of The Catapult Book Club will come to order on the evening of Thursday, April 9th at 7pm - ONLINE!

This meeting will be happening via Zoom:

The current selection is When the Whales Leave by Yuri Rytkheu, translated from the Russian by Ilona Yazhbin Chavasse.

Nau cannot remember a time when she was not one with the world around her: with the fast breeze, the green grass, the high clouds, and the endless blue sky above the Shingled Spit. But her greatest joy is to visit the sea, where whales gather every morning to gaily spout rainbows. Then, one day, she finds a man in the mist where a whale should be: Reu, who has taken human form out of his Great Love for her. Together these first humans become parents to two whales, and then to mankind. Even after Reu dies, Nau continues on, sharing her story of brotherhood between the two species. But as these origins grow more distant, the old woman's tales are subsumed into myth--and her descendants turn increasingly bent on parading their dominance over the natural world. Buoyantly translated into English for the first time by Ilona Yazhbin Chavasse, this new entry in the Seedbank series is at once a vibrant retelling of the origin story of the Chukchi, a timely parable about the destructive power of human ego--and another unforgettable work of fiction from Yuri Rytkheu, "arguably the foremost writer to emerge from the minority peoples of Russia's far north" (New York Review of Books).

When the Whales Leave (Paperback)

Sabrina & Corina: Stories
by Kali Fajardo-Anstine
Get 20% off the pick and join us for an online discussion of the book on Thursday, August 13 at 6pm