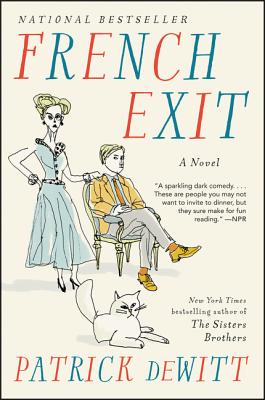 The next meeting of The Catapult Book Club will come to order on the evening of Thursday, October 10th at 7pm.

The current selection is French Exit by Patrick deWitt

“A modern story, a satire about an insouciant widow on a quest for refined self-immolation.... DeWitt’s surrealism is cheerful and matter-of-fact, making the novel feel as buoyantly insane as its characters.... DeWitt is a stealth absurdist, with a flair for dressing up rhyme as reason.” -The New Yorker

“[A] riotous tragedy of (ill) manners....  The show stealer here is deWitt’s knack for scene setting and dialogue in the form of Frances’ wry one-liners.... That Frances sure is a force to contend with. But what a classy broad.” -San Francisco Chronicle

"Definitely the funniest book I read in 2018. Somehow Dewitt writes in a completely different style every time & his books are always populated with the weirdest normal people you’ll ever encounter. (See also the hilarious The Sisters Brothers & Undermajordomo Minor.) French Exit’s Frances & Malcolm are straight out of a Wes Anderson film, with their awful behavior, privileged snobbery, & whipcracking hilarious dialogue. Great fun & it’s got a little heart there at the end. -seth

All book club selections are 20% off during the month before the meeting - and meetings are of course are open to all!