The Underground Railroad Records: Narrating the Hardships, Hairbreadth Escapes, and Death Struggles of Slaves in Their Efforts for Freedom (Paperback) 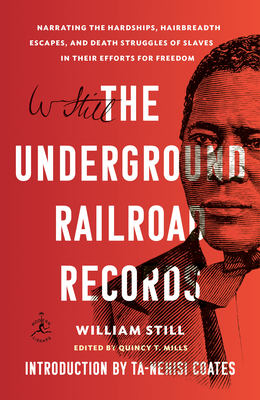 A riveting collection of the hardships, hairbreadth escapes, and mortal struggles of enslaved people seeking freedom: These are the true stories of the Underground Railroad.

As a conductor for the Underground Railroad—the covert resistance network created to aid and protect slaves seeking freedom—William Still helped as many as eight hundred people escape enslavement. He also meticulously collected the letters, biographical sketches, arrival memos, and ransom notes of the escapees. The Underground Railroad Records is an archive of primary documents that trace the narrative arc of the greatest, most successful campaign of civil disobedience in American history.

This edition highlights the remarkable creativity, resilience, and determination demonstrated by those trying to subvert bondage. It is a timeless testament to the power we all have to challenge systems that oppress us.

William Still (1821-1902), was an African American abolitionist, writer, historian, and the conductor of the Underground Railroad. Before the American Civil War, Still was a chairman of the Vigilance committee of the Pennsylvania Anti-Slavery Society, and directly aided fugitive slaves, keeping records to help families reunite. Born in a free state, Still's father bought his own freedom and his mother was a twice-escaped slave and under federal slave law Still was legally a slave himself. William Still helped as many as 800 slaves escape to freedom.