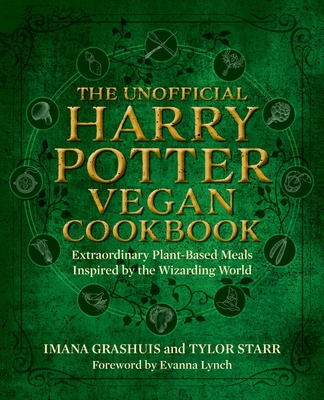 The Unofficial Harry Potter Vegan Cookbook is a stunning, visual delight that features more than 75 mouth-watering recipes certain to be enjoyed by vegans and non-vegans alike.

Created by Imana Grashuis, kitchen witch, recipe developer and photographer and Tylor Starr, founder of The Protego Foundation and the Chickpeeps podcast, the book is both an amazing recipe collection as well as an encouraging, uplifting invitation to the vegan lifestyle.

From Molly Weasley’s Breakfast Spread to Giant Pumpkin Patch Brownies, the authors imbue every recipe with text and imagery that capture the feel of the Wizarding World, with a bit of storytelling thrown in for good measure.

The book's foreword is written by Harry Potter actor/icon Evanna Lynch, best-known for her role as Luna Lovegood.

IMANA GRASHUIS is the founder and soul behind Magical Food Department. A Dutch practicing Kitchen Witch obsessed with the wizarding world, Imana is a full-time food photographer, stylist and recipe developer. Emotions and scents have stuck in her memory from childhood and made her the Kitchen Witch she is today. Her love for her heritage and passion for witchcraft came together as one and forged a path where she creates dishes she wishes existed. This process has made for an explosion of work and creativity, a dream that nurtures her purpose to inspire others to try vegan food and heal the world through every recipe in an immersive way. To follow Imana’s work, visitmagicalfooddepartment.com or her Instagram: @magicalfooddepartment.

TYLOR STARR is the world’s foremost expert on “Animal Rights in the Wizarding World” fan activism, creator and co-founder of the wizarding-inspired animal rights charity The Protego Foundation, co-host of The ChickPeeps vegan podcast and producer of the Radicals & Revolutionaries podcast. Tylor’s full-time work in animal rights began in 2012 when he joined PETA working in youth outreach as a senior strategist to mobilize young people for animal liberation. He currently lives in his hometown of Greeley, Colorado, with his partner, Danielle and their beloved rescue pup, Roxy. To follow Tylor’s work, visit tylorstarr.com.

EVANNA LYNCH is an actress, writer and podcaster. Her professional career began at the age of 14 when she played the role of Luna Lovegood in the Harry Potter film series. A lifelong animal lover, Evanna went vegan in 2013 and in 2017 launched a vegan podcast, The ChickPeeps, to explore veganism in a friendly, fun, accessible way. She began her literary journey in October 2021 by publishing her memoir, The Opposite of Butterfly Hunting: The Tragedy and the Glory of Growing Up. She lives in London with her cat friend, Puff, where she divides her time between acting, writing and animal rights activism.

"If you are a fan of Harry Potter Don’t miss this cookbook with 75 delicious vegan recipes perfect for a magical world."
-- DeliciousFood.com

"You can now cook your own vegan Harry Potter dishes with the help of this exquisite cookbook!"
-- Girl Gamer Galaxy

"Enjoy your own self-guided Potions course by mixing up a cauldron of pumpkin juice or try your hand at Dark Arts Fudge. Some recipes do take time, but the instructions are simple enough that even Crab or Goyle could perfect them."
-- VegNews

"If you’re a fan of the Harry Potter franchise, you won’t want to miss out on this cookbook."
-- PETA

"The book is both an amazing recipe collection as well as an encouraging, uplifting invitation to the vegan lifestyle."
-- Wild Hearted