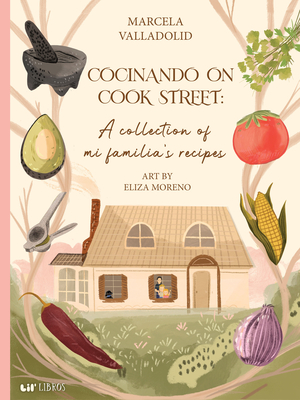 Inspired by her own Mexican ancestry and culture, chef Marcela Valladolid's children's cookbook leads readers through the magic and legacy of her family recipes. From homemade chili-lime chips and fresas con crema to arroz rojo and carne asada tacos, there's a recipe for every person and occasion. Everyone will have the opportunity to cook and taste a little bit of Mexico

Marcela Valladolid is an Emmy-nominated celebrity chef, television personality, designer, author, mother and businesswoman. Marcela began her professional career as a Food Editor for Bon Appetite Magazine. She has hosted her own shows ("Mexican Made Easy" & "Relatos Con Sabor") and co-hosted the three-time Emmy Nominated Food Network hit show "The Kitchen." She has also appeared as a celebrity judge for 3 seasons on the Food Network show "Best Baker in America." Marcela released her 3rd book, CASA MARCELA, in 2017 and her 4th book, "Fiestas; Tidbits, Margaritas & More," in 2019, which were both national best sellers. Marcela resides in Chula Vista, CA with her partner Philip Button and their three children (Fausto, David and Anna Carina) and their dog, Kongo. For more on Marcela, follow @ChefMarcela on Instagram.Eliza Moreno is a children's book designer and illustrator. She loves experimenting with traditional techniques, like watercolor, graffiti, and gouache, but she is in love with digital illustration. Currently, she lives in a little corner of Mexico City.