Utomia: The Legend Beyond (Hardcover) 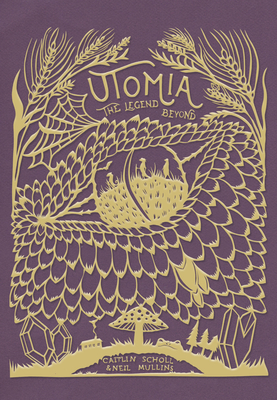 With Utomia, Caitlin Scholl and Neil Mullins have crafted a marvel. I tore through this book like it was on fire, and when I finished I was heartbroken to leave this world of lizards and bats and meerkats, with its strange concoction of magic and science. I hope they hurry up and finish the next one, because I can't wait to see what happens next. -Jimmy Cajoleas, author of Goldeline

Utomia: The Legend Beyond is the story of Laoch, a talented young lizard uninspired by the slow pace of his small farming community. Laoch spends his time building a secret fort with his brother and two best friends and daydreaming about life in the fabled city of Utomia.

But everything changes when Laoch leads his friends through a series of scientific experiments and something goes drastically awry. A plume of magical purple smoke begins to rise from their village and the greatest powers of the world--including the Utomian Army--take note, quickly mobilizing toward the boys' small town.

In the first book of this incredible series, Laoch and company venture through a planet of strange beings, secret societies, and time warps enacted by the giant Water Clock that protects the magical city. The boys' individual journeys bring them closer to the understanding of bravery, love, and the true meaning of friendship as they struggle to save not only their families, but one another.