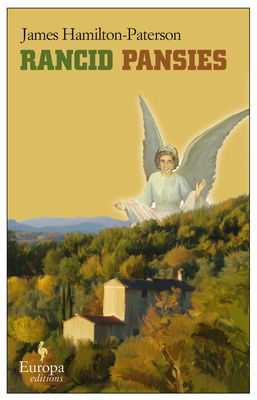 When we last saw our hero he had taken to his bed in England, his beloved home in Tuscany having inexplicably capsized into a ravine. As Rancid Pansies opens, Samper is recuperating in Sussex at the home of the famous conductor Max Christ when he learns that film rights to his book on Millie Cleat—the one-armed yachtswoman whose inadvertent hari-kari televised on Christmas day gave his book an enormous boost—have been sold. This windfall is sufficient to finance a return to Italy and provide the time to indulge a long suppressed aspiration: writing the libretto for an opera (if only he can find a suitable subject). Before departing, the ever-gracious Gerald insists on preparing a farewell dinner for Max, his family and friends. The meal of liver smoothies and field mouse vol-au-vent is a memory-maker—and the assembled company’s gag reflex is one of heroic proportions.

Back in Italy, Gerald discovers that an offhand remark he had made while surveying the wreckage of his house, claiming he and his friends were saved by an apparition of the late Princess of Wales, has found its way into the Italian newspapers. Now, religious pilgrims and curious tourists have erected an ad hoc shrine on what is left of his property. Annoying to be sure, but there is the kernel of a grand idea here. Opera requires romance and tragedy, right? And who more than the People’s Princess had such theatrics in super-sized quantities? And, if Princess Diana were to become Saint Diana, think of the promotional possibilities, the merchandising! So fasten your seat belts: it’s going to be a hilarious journey with some of the most appealing comic characters and sumptuous writing in recent literature.

James Hamilton-Paterson lives and works in Italy. He is the author of several novels, including Loving Monsters and Gerontius, winner of the Whitbread Best First Novel Award in 1989, a collection of essays dedicated to the lost grandeur of the sea entitled Seven-Tenths, and several non-fiction books including America’s Boy, a study of Ferdinand Marcos and the Philippines. He is also the author of two books of poetry and a regular contributor to Granta.