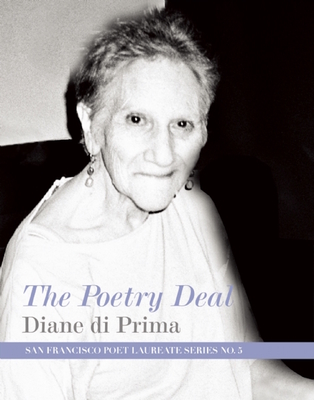 The Poetry Deal shines with eros and kindness and the reality of inspiration. No American or Anarchist voice or soul-building heart has ever been more clear. The pages are fierce with love and generosity.--Michael McClure, author of Ghost Tantras The Poetry Deal is fresh flame from a revolutionary fire that continues to burn. Every woman of every age should carry it in a purse with their pepper spray. Diane is the ultimate weapon.--Amber Tamblyn, author of Dark Sparkler In her latest collection as San Francisco Poet Laureate, di Prima is again at the height of her powers, with 'the act of writing itself more compelling than ever.'--Micah Ballard, author of Waifs and Strays I return to this book again and again to remember what it means to own and further a poetic and political lineage.--Ana Bozicevic, author of Rise in the Fall The Poetry Deal is] an urgent success of the highest order . . . Diane di Prima should always be high on the American poetry play list.--Barbara Berman, The Rumpus Recounting a life in poetry, her commitment to progressive thought and action, and a half-century of Bay Area culture, crises, and change, di Prima writes at the top of her game . . . di Prima recalls the time an institutionalized Ezra Pound told her that 'poets have to eat'; rarely has a poet left so much bread on the table for future poets.--*Starred Review, Publishers Weekly This is a volume that traverses the specific and reaches the universal. She marks her poems with great strength and utmost sensitivity. They are poems that live in real time; not cyberspace. di Prima's poetry is well-lived and poetry worth living in. She is a gifted teacher enjoining the reader to face life's lessons for the attendant dilemmas of old age. Carry this book with you. It will arm you with continuous insight and flaming provocation."--Robert Sutherland-Cohen Framed by two passionate, and critical, prose statements assessing her adopted home city, The Poetry Deal is a collection of poems that provide a personal and political look at forty years of Bay Area culture. Often elegiac in tone, the book captures the poet's sense of loss as she chronicles the deaths of friends from the AIDS epidemic as well as the passing of illustrious countercultural colleagues like Philip Whalen, Pigpen from the Grateful Dead, and Kirby Doyle. She also recalls and mourns out-of-town inspirations like Ch gyam Trungpa Rinpoche, Audre Lorde, and Ezra Pound. Yet even as she laments the state of her city today, she finds triumph and solace in her own relationships, the marriages of her friends, the endurance of City Lights, and other symbols of San Francisco's heritage. Born in Brooklyn in 1934, Diane di Prima emerged as a member of the Beat Generation in New York in the late '50s; in the early '60s, she founded the important mimeo magazine The Floating Bear with her lover LeRoi Jones (Amiri Baraka). In the late '60s, she moved to San Francisco, where she would publish her groundbreaking Revolutionary Letters (1971) with City Lights. Her other important books include Memoirs of a Beatnik, Pieces of a Dream, Recollections of My Life as a Woman, and Loba. She was named San Francisco Poet Laureate in 2009.

Feminist Beat poet Diane di Prima was born in Brooklyn, New York. She attended Swarthmore College for two years before moving to Greenwich Village in Manhattan and becoming a writer in the emerging Beat movement. There, she developed friendships with poets Amiri Baraka, Allen Ginsberg, Jack Kerouac, Frank O'Hara, and Audre Lorde. After joining Timothy Leary's intentional community in upstate New York, she moved to San Francisco in 1968.Di Prima has published more than 40 books. Her poetry collections include This Kind of Bird Flies Backwards (1958), the long poem Loba (1978, expanded 1998), and Pieces of a Song: Selected Poems(2001). She is also the author of the short story collection Dinners and Nightmares (1960), the semi-autobiographical Memoirs of a Beatnik;(1968), and the memoir Recollections of My Life as a Woman: The New York Years (2001).With Amiri Baraka, she co-edited the literary magazine The Floating Bear from 1961 to 1969. She co-founded the Poets Press and the New York Poets Theatre and founded Eidolon Editions and the Poets Institute. A follower of Buddhism, she also co-founded the San Francisco Institute of Magical and Healing Arts.Di Prima was named Poet Laureate of San Francisco in 2009. She has been awarded the National Poetry Association's Lifetime Service Award and the Fred Cody Award for Lifetime Achievement and has also received grants from the National Endowment for the Arts, the Committee on Poetry, the Lapis Foundation, and the Institute for Aesthetic Development. St. Lawrence University granted her an honorary doctorate.She has taught at the Jack Kerouac School of Disembodied Poetics at the Naropa Institute, the California College of Arts and Crafts, and in the Masters-in-Poetics program at the New College of California. Selections of her papers are held at the University of Louisville, Indiana University, Southern Illinois University, and the University of North Carolina at Chapel Hill's libraries. Di Prima lives in Northern California.Diane di Prima passed away on October 25th, 2020.