The Soil and Health: A Study of Organic Agriculture (Paperback) 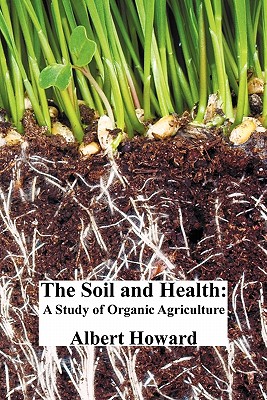 The Soil and Health, a classic of organic farming, is an essential introduction to organic gardening and farming.

"The health of soil, plant, animal and man is one and indivisible." - Albert Howard.

At the turn of the twentieth century, chemical fertilizers seemed to offer limitless potential in agriculture. However, when British agriculturalist Albert Howard travelled to India as Imperial Economic Botanist to the Government of India, he observed Vedic agriculture as practiced by India peasant farmers, and noted the health benefits to plants, animals and humans from what we now call organic agriculture. Albert Howard, Rudolph Steiner and Lady Eve Balfour are considered the first proponents of organic agriculture.

In his own words: "The soil is, as a matter of fact, full of live organisms. It is essential to conceive of it as something pulsating with life, not as a dead or inert mass. There could be no greater misconception than to regard the earth as dead: a handful of soil is teeming with life. The living fungi, bacteria, and protozoa, invisibly present in the soil complex, are known as the soil population. This population of millions and millions of minute existences, quite invisible to our eyes of course, pursue their own lives."

"The first duty of the agriculturalist must always be to understand that he is a part of Nature and cannot escape from his environment. He must therefore obey Nature's rules," Howard wrote. He believed that the farmer must work with nature instead of with chemical fertilizers and pesticides for long-term sustained yields. Howard's belief in the importance of manures, compost and mycorrhizal fungi is now generally accepted, and is echoed in the organic gardening motto, "Feed the soil not the plant."

Sir Albert Howard presents a summary of his life's work in this book. Howard states "This law is true for soil, plant, animal, and man: the health of these four is one connected chain."Anyone interested in organic gardening and farming will find this a fascinating book.

Sir Albert Howard (1873 - 1947) was an English botanist. He studied at Cambridge University as a Foundation Scholar and lectured in the West Indies and the United Kingdom. From 1905 to 1924 he was Imperial Economic Botanist in India. He promoted organic methods through the Rodale Institute in the USA and the Soil Association in the UK and is one of the pioneers in the field.