Everything and Less: The Novel in the Age of Amazon (Hardcover) 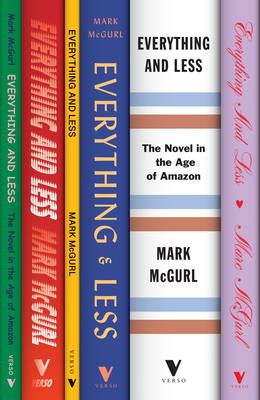 What Has Happened to Fiction in the Age of Platform Capitalism?

Since it was first launched in 1994, Amazon has changed the world of literature. The “Everything Store” has not just transformed how we buy books; it has affected what we buy, and even what we read. In Everything and Less, acclaimed critic Mark McGurl explores this new world where writing is no longer categorized as high or lowbrow, literature or popular fiction.

Charting a course spanning from Henry James to E. L. James, McGurl shows that contemporary writing has less to do with writing per se than with the manner of its distribution. This consumerist logic—if you like this, you might also like ...—has reorganized the  fiction universe so that literary prize-winners sit alongside fantasy, romance, fan fiction, and the infinite list of hybrid genres and self-published works.

This is an innovation to be cautiously celebrated. Amazon’s platform is not just a retail juggernaut but an aesthetic experiment driven by an unseen algorithm rivaling in the depths of its effects any major cultural shift in history. Here all fiction is genre fiction, and the niches range from the categories of crime and science fiction to the more refined interests of Adult Baby Diaper Lover erotica.

Everything and Less is a hilarious and insightful map of both the commanding heights and sordid depths of fiction, past and present, that opens up an arresting conversation about why it is we read and write fiction in the first place.

Mark McGurl is the Albert Guérard Professor of Literature at Stanford University. His last book, The Program Era: Postwar Fiction and the Rise of Creative Writing, won the Truman Capote Award for Literary Criticism. He previously worked for The New York Times and The New York Review of Books.

“Fierce … Everything and Less enlists literary sources to explain the place of culture in a neoliberal economy.”
—Leah Price, New York Times

“[McGurl] is attuned to America’s signature queasiness about class, pleasure, and mass culture that constellates around reading and education. In Everything and Less, this takes the form of wild anthropological delight as he explores genres, and micro-genres, long dismissed by most mainstream scholarship and criticism.”
—Parul Sehgal, New Yorker

"McGurl is above all a literary sociologist, and a brilliant one at that: it seems unlikely that any recent or forthcoming book can rival Everything and Less as a survey, at once brashly comprehensive and nimbly speculative, of the contemporary literary world."
— Ben Kunkel, Bookforum

“[Mark McGurl is] the most exhaustive scholar to track US fiction’s myriad paths from Henry James to Chuck Tingle … a man who has read a lot, and, in the end, very earnestly.”
—Dan Sinykin, Los Angeles Review of Books

“To survey the vast expanse of Amazon’s literary domain, McGurl makes frequent excursions into popular genres rarely considered among academics and critics … prompting a reassessment of the literary center and the literary fringe.”
—Hannah Gold, Nation

“As Mark McGurl suggests in this deep dive into the ubiquitous reach of ‘the world’s biggest bookstore,’ in the age of Amazon, ‘every novel is a genre novel.’”
—Lit Hub (“Most Anticipated Books of 2021”)

"McGurl here argues that the retail behemoth that once proudly called itself Earth's Biggest Bookstore has blurred, to the point of indistinction, the alleged line between literary and genre fiction. Proving, perhaps his point: a visit to Professor McGurl's book's page on Amazon leads one to Psions of SPIRE bundle: Vol. 1, a box set of paranormal, LGBTQ-fantasy romances by Alex Silver."
—Globe and Mail

"In this provocative literary history, McGurl draws a line between Amazon's distribution model and the dissolution of genre boundaries, arguing that Amazon's algorithm has effectively turned all fiction into genre fiction. In lucid and well-argued prose, McGurl raises important questions about just where all this disruption is taking us."
—Esquire (Best Books of Fall 2021)

"In the last couple decades, Amazon fundamentally transformed the business of bookselling, changing how customers buy their favorite titles and disrupting supply chains around the world. But how has the company also impacted writing on an aesthetic level? That's one of the questions driving this study of modern literature from critic and professor Mark McGurl."
—Thrillist (24 Books We Can't Wait to Read This Fall)

“In Everything and Less, accomplished literary critic Mark McGurl makes the case that the online superstore has also changed the way that we read.”
—Jeva Lange, The Week

“Consumers might find in McGurl’s book a warning to stay as far away as possible and seek out better forms of discovery than Amazon’s website, like visiting an indie bookstore, asking a friend, or reading a magazine–looking for anything but what rises to the top of the feed.”
—Kyle Chayka, New Republic

“The point here—and I think it’s the most profound in McGurl’s very entertaining book—is that Amazon is refashioning the novel as an object.”
—Christopher Webb, Review 31

“Intriguing and entertaining … Everything and Less is a good starting point for a re-consideration of literary production and reading in our times.”
—M.A. Orthofer, The Complete Review

“Engrossing … McGurl argues that Amazon’s outsize role in serving readers’ needs has had a profound impact, not just on well-documented matters of retailing and warehousing, but on what we read, and to an extent, the content of the books themselves.”
—Mark Athitakis, On the Seawall

“Intriguing … McGurl’s object of study is not just the literary Age of Amazon but the place of the novel within it.”
—Megan Marz, Baffler

“Probing … Everything and Less will speak to those who submerge themselves—whether as writers or readers, entrepreneurs or customers—into the [Kindle Direct Publishing] landscape, while offering much to think about … for those who cherish traditional publishing and still place some value in the role that gatekeepers have long played in the book industry.”
—Robert Weibezahl, BookPage

“Everything and Less offers a sprawling account of the contemporary literary field, now being remade according to tbaffhe ethos of the megacorporation. McGurl’s theory of the novel is a romp, keyed to his compelling account of the genre system as it is being driven by Amazon and refined by Kindle Direct Publishing.”
—Lisa Gitelman, Public Books

“McGurl is above all a literary sociologist, and a brilliant one at that: it seems unlikely that any recent or forthcoming book can rival Everything and Less as a survey, at once brashly comprehensive and nimbly speculative, of the contemporary literary world.”
—Benjamin Kunkel, Bookforum