Heroes and Marvels of the Middle Ages (Hardcover) 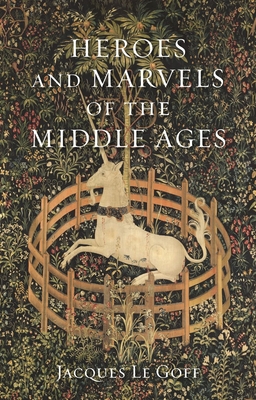 By Jacques Le Goff, Teresa Lavender Fagan (Translated by)
$22.50
On Our Shelves Now

Heroes and Marvels of the Middle Ages is a history like no other: it is a history of the imagination, presented between two celebrated groups of the period. One group consists of heroes: Charlemagne, El Cid, King Arthur, Orlando, Pope Joan, Melusine, Merlin the Wizard, and also the fox and the unicorn. The other is the miraculous, represented here by three forms of power that dominated medieval society: the cathedral, the castle, and the cloister. Roaming between the boundaries of the natural and the supernatural, between earth and the heavens, the medieval universe is illustrated by a shared iconography, covering a vast geographical span. This imaginative history is also a continuing story, which presents the heroes and marvels of the Middle Ages as the times defined them: venerated, then bequeathed to future centuries where they have continued to live and transform through remembrance of the past, adaptation to the present, and openness to the future.

A renowned specialist in the Middle Ages and member of the École des Annales, Jacques Le Goff (1924–2014) was director of studies at the School for Advanced Studies in the Social Sciences, Paris. He is the author of many books including The Middle Ages Explained in Pictures.

"Le Goff explores wonders and oddities that caught the imagination in the past. If you are a parent of an eight-year-old girl you are likely to meet unicorns on a daily basis. Multicolored unicorns with rainbow-hued manes and tails on T-shirts and pyjamas and drawings stuck on the fridge. Your daughter will write stories about unicorns and even have one as pet in some virtual technological world she inhabits with her friends. And when you ask what’s so great about unicorns you'll be told, 'Well, they're magic!' But you still won't get it. To begin to understand, you need to go straight to the unicorn chapter of this first English translation of Heroes and Marvels of the Middle Ages by the French medievalist le Goff. The existence of the unicorn has been attested since classical times, including in Pliny's De Rerum Natura, but the key text, Goff tells us, is a Gnostic treatise written in Greek in Alexandria between the second and fourth centuries AD, and soon translated into Latin, called the Physiologus."
— Philip O Ceallaigh

"This welcome translation makes Le Goff’s Heros et merveilles du Moyen Age, originally published in 2005, available to an Anglophone audience. The work of this French historian emphasized the multilayered nature of history and the importance of social and economic trends alongside political or diplomatic themes. Le Goff’s contributions to the reassessment of medieval civilization continued throughout his life, and his influence has been far-reaching."
— Folklore