Ancient Sorceries, Deluxe Edition: The most eerie and unnerving tales from one of the greatest proponents of supernatural fiction (Hardcover) 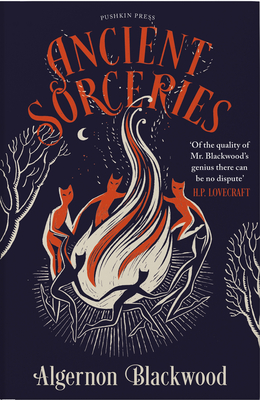 A beautifully produced new edition of Blackwood’s weirdest supernatural stories, including “The Willows,” highlighted by H.P. Lovecraft as "the single finest weird tale in literature”

Lauded as one of our greatest storytellers, and inspiring generations of writers from H.P. Lovecraft to Tolkien to Stephen King, Algernon Blackwood left a legacy as one of Britain's greatest conjurors of weird and supernatural stories. Blackwood’s inimitable style puts readers right in the middle of the story, with visceral and nature-inspired fear that lies just beyond the real, often in the form of a nameless dread.

This beautifully produced edition, with a stunning cover and thoughtful design and layout to ensure the most enjoyable reading experience, features four of his most unnervingly curious tales:

Algernon Blackwood was born in Shooter's Hill, now a suburb of London, in 1869. Raised in a strictly Christian household, Blackwood was interested in other religions from a young age and eventually came to believe in what he called 'animism'--the idea that nature was sentient and embued with spiritual meaning--which greatly influenced his work. In 1880, he travelled to North America where he hunted moose, worked as a reporter, and wrote short stories. Throughout his life he continued to travel widely and write prolifically, producing 14 novels as well as many popular collections of weird and ghostly tales.