The Inspector of Strange and Unexplained Deaths (Pushkin Vertigo #30) (Paperback) 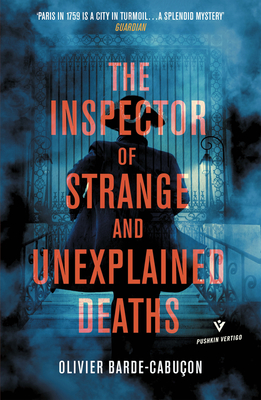 By Olivier Barde-Cabucon, Louise Lalaurie Rogers (Translated by)
$14.95
On Our Shelves Now

Everyone has secrets. Especially the king.
When a gruesomely mutilated body is found on the squalid streets of Paris in 1759, the Inspector of Strange and Unexplained Deaths is called to the scene. The body count soon begins to rise and the Inspector is brought even further into a web of deceit that stretches from criminals, secret orders, revolutionaries and aristocrats to very top of society.
In the murky world of the court of King Louis XV, finding out the truth will prove to be anything but straightforward.

'A splendid mystery with an appealingly enigmatic protagonist, plenty of melodrama and intrigue, and a vivid, pungent evocation of a turbulent time.' -- Guardian

'An entertaining introduction to the series... Barde-Cabuçon not only produces a satisfying mystery story but also successfully captures the febrile atmosphere of a society where the ancien régime is under threat from the emerging ideas of the Enlightenment.' -- Sunday Times

'A racy historical mystery with real style, dash and brilliance... The inspector and Casanova carry the riveting story to an unexpected conclusion ... Keeps the suspense at maximum level to the end.' --Crime Reviews

'A compelling thriller set in pre-revolutionary France with engaging characters that you are never entirely sure if you can trust - a CUB must read!' -- CUB Magazine

'Rich with historical detail and macabre atmosphere... A story full of intrigue and secret societies.' --Culturefly