Encounters and Destinies: A Farewell to Europe (Paperback) 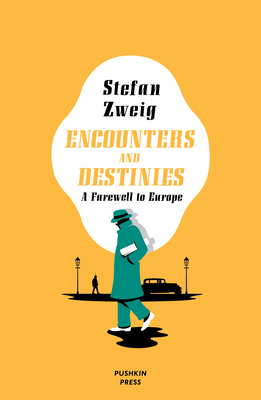 By Stefan Zweig, Will Stone (Translated by)
$16.95
On Our Shelves Now

A new collection of essays by Stefan Zweig: tributes to the great artists and thinkers of the Europe of his day

Stefan Zweig was one of the twentieth century's greatest authors and a tireless champion of freedom, tolerance and friendship across borders. Encounters and Destinies collects his most impassioned and moving tributes to his many illustrious friends and peers: literary, philosophical and artistic luminaries from across the Old Europe that Zweig loved so much, and which he grieved to see so cruelly destroyed by two world wars.

Including pieces on Rainer Maria Rilke, Marcel Proust, Sigmund Freud, Maxim Gorky and Arturo Toscanini, this essential collection is also Zweig's tribute to the ideal of friendship: an ideal he clung to as the world he knew was torn apart.

Stefan Zweig was one of the most popular and widely translated writers of the early twentieth century. Born into an Austrian-Jewish family in 1881, he became a leading figure in Vienna's cosmopolitan cultural world and was famed for his gripping novellas and vivid psychological biographies.

In 1934, following the Nazis' rise to power, Zweig fled Austria, first for England, where he wrote his famous novel Beware of Pity, then the United States and finally Brazil. It was here that he completed his acclaimed autobiography The World of Yesterday, a lament for the golden age of a Europe destroyed by two world wars. The articles and speeches in Messages from a Lost World were written as Zweig, a pacifist and internationalist, witnessed this destruction and warned of the threat to his beloved Europe. On 23 February 1942, Zweig and his second wife Lotte were found dead, following an apparent double suicide.

‘Encounters and Destinies… capture(s) a special moment in modern European culture, caught for posterity on the eve of catastrophe.’ — The Jewish Chronicle

'Zweig's accumulated historical and cultural studies [are] almost too impressive to take in.' — Clive James