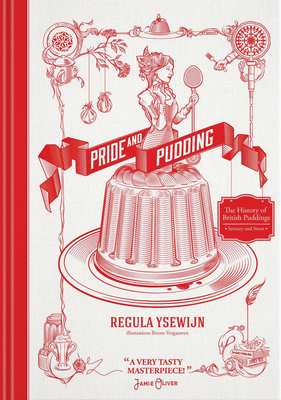 By Regula Ysewijn
Email or call for price.
Out of Print

Let Regula Ysewijn’s Pride and Pudding take you to the heart of Britishness in this beautiful part-recipe, part-fascinating culinary history book of the British pudding that Heston Blumenthal would be proud of.

In Pride & Pudding, food photographer and writer Regula Ysewijn takes you on a journey through the fascinating culinary history of Great Britain. Hailed as “a truly wonderful thing of beauty…a very tasty masterpiece” by Jamie Oliver, Regula’s Pride and Pudding contains over 80 recipes that give the reader an insight into the life and times of the Great British Pudding in its various sweet and savory forms.

With a distinctly gothic-romance aesthetic, Regula recreates the well-known puddings such as Haggis, Black pudding, Bakewell pudding and Queen of puddings, to the lesser known (yet once popular) puddings such as Snake fritters, Cabinet pudding and Mock plum pudding ice for the 21st century kitchen.

With stunning photography and fascinating facts along the way (did you know the Jam Roly-Poly was nicknamed ‘Dead Man’s Arm’ due to the custom of it being boiled in an old shirt sleeve?), Pride and Pudding is a refreshingly different kind of cookbook that’s a must for anybody who delights in British history and British food.

Regula Ysewijn is a Belgian author and photographer with a particular interest in the evolution of our food and drink culture. Her books Pride and Pudding and Belgian Cafe Culture were both lauded by BBC Radio Four's acclaimed The Food Programme. Pride and Pudding was also shortlisted for the Fortnum & Mason Food and Drink Awards and the Andre Simon Awards. Regula is a judge on the Flemish version of The Great British Bake Off.