Diary of a Foreigner in Paris (Paperback) 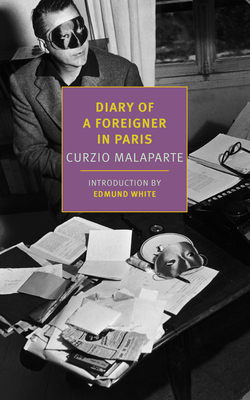 Experience postwar Europe through the diary of a fascinating and witty twentieth-century writer and artist. Recording his travels in France and Switzerland, Curzio Malaparte encounters famous figures such as Cocteau and Camus and captures the fraught, restless spirit of Paris after the trauma of war.

In 1947 Curzio Malaparte returned to Paris for the first time in fourteen years. In between, he had been condemned by Mussolini to five years in exile and, on release, repeatedly imprisoned. In his intervals of freedom, he had been dispatched as a journalist to the Eastern Front, and though many of his reports from the bloodlands of Poland and Ukraine were censored, his experiences there became the basis for his unclassifiable postwar masterpiece and international bestseller, Kaputt. Now, returning to the one country that had always treated him well, the one country he had always loved, he was something of a star, albeit one that shines with a dusky and disturbing light.

The journal he kept while in Paris records a range of meetings with remarkable people—Jean Cocteau and a dourly unwelcoming Albert Camus among them—and is full of Malaparte’s characteristically barbed reflections on the temper of the time. It is a perfect model of ambiguous reserve as well as humorous self-exposure. There is, for example, Malaparte’s curious custom of sitting out at night and barking along with the neighborhood dogs—dogs, after all, were his only friends when in exile. The French find it puzzling, to say the least; when it comes to Switzerland, it is grounds for prosecution!

Curzio Malaparte (pseudonym of Kurt Eric Suckert, 1898-1957) was born in Prato, Italy, and served in World War I. An early supporter of the Italian Fascist movement and a prolific journalist, Malaparte soon established himself as an outspoken public figure. In 1931 he incurred Mussolini's displeasure by publishing a how-to manual entitled Technique of the Coup-d'Etat, which led to his arrest and a brief term in prison. During World War II Malaparte worked as a correspondent, for much of the time on the eastern front, and this experience provided the basis for his two most famous books, Kaputt (1944) and The Skin (1949), both available as NYRB Classics. His political sympathies veered to the left after the war. He continued to write, while also involving himself in the theater and the cinema.

Stephen Twilley is the managing editor of Public Books. His translations from the Italian include Francesco Pacifico's The Story of My Purity and Marina Mander's The First True Lie, and for NYRB Classics, Giuseppe Tomasi di Lampedusa's The Professor and the Siren. He lives in Chicago.

“This gossipy, free-flowing diary is a chronicle of Paris in 1947, when, still shadowed by his fascist history, Malaparte rejoined the bohemian elite with renewed vigor. The startling, often comic results reveal an acid pen (and personality) that provoked the likes of Albert Camus and Jean Cocteau.” —James Tarmy, Bloomberg

“Curzio Malaparte moved back and forth politically and professionally like a ping pong ball—a Tuscan from Prato, his philology, philosophy and friendships make him a perfect exemplar of the adage: 'Italy never ended a war on the same side on which she started.' To say the least, despite prison, wars and disputatious behavior, he was a survivor par excellence. He wrote fascinating novels, including Kaputt, and my personal favorite, The Skin. His Diary of a Foreigner in Paris is a self-conscious record of a man-against-the-world’s desperate denouement. Malaparte is a Man Apart—a writer like no other.” —Barry Gifford