Green Fire: Extraordinary Ways to Grill Fruits and Vegetables, from the Master of Live-Fire Cooking (Hardcover) 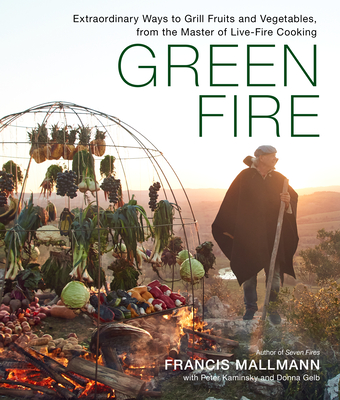 Green Fire is an extraordinary vegetarian cookbook, as Mallmann brings his techniques, creativity, instinct for bold flavors, and decades of experience to the idea of cooking vegetables and fruits over live fire. Blistered tomatoes reinvigorate a classic Caprese salad. Eggplants are buried whole in the coals—a technique called rescoldo—then dance that fine line between burned and incinerated until they yield an ineffable creaminess made irresistible with a slather of parsley, chile, and aioli. Brussels sprout leaves are scorched and served with walnuts; whole cabbages are sliced thick, grilled like steaks, and rubbed with spice for a mustard-fennel crust. Corn, fennel, artichokes, beets, squash, even beans—this is the vegetable kingdom, on fire.

The celebrated Patagonian chef, known for his mastery of flame and meat, the chef who romanced the food world with an iconic image of a whole cow dressed and splayed out over licking flames, is returning to the place where his storied career began—the garden and all its bounty. It’s his new truth: the transformation wrought by flame, coals, and smoke on a carrot or peach is nothing short of alchemy.

And just as he’s discovered that a smoky, crackling-crusted potato cooked on the plancha is as sublime as the rib-eye he used to serve it next to, Mallmann’s also inspired by another truth: we all need to cut down on consuming animals to ensure a healthier future for both people and the planet. Time to turn the fire “green.”

Cooking with fire demands both simplicity and perfection. But the results are pure magic. By using this oldest of cooking techniques, you’ll discover fruits and vegetables pushed to such a peak of flavor it’s as if they’d never been truly tasted before.

Francis Mallmann, author of Seven Fires and Mallmann on Fire, is the reigning star of food television in the Spanish-speaking world, and the most famous and popular chef in South America. His restaurants include Siete Fuegos at the Vines Resort & Spa in Argentina’s wine country; Patagonia Sur in Buenos Aires; El Garzón in Uruguay; 1884 Restaurante in Mendoza, Argentina (named one of Latin America’s 50 Best Restaurants); and Los Fuegos in Miami. USA Today and the Times (London) have named his restaurants among the top 10 places to eat in the world. Most recently, Mallmann was the subject of the Netflix documentary series Chef’s Table.
Peter Kaminsky is the author and coauthor of many books, including Pig Perfect, Culinary Intelligence, and Green Fire, Seven Fires, and Mallmann on Fire (with Francis Mallmann). He is a longtime contributor to Food & Wine and a former columnist for the New York Times and New York magazine. He was managing editor of National Lampoon. He lives in Brooklyn, New York.

“Mallmann, the world’s foremost grilling expert . . . makes the argument for charring everything from berries to citrus to fennel.”
—Bloomberg BusinessWeek

“Long considered the meat maestro when it comes to grilling, the Argentine chef and restaurateur Francis Mallmann has turned his attention to plants. His latest, vibrantly illustrated tome . . . covers fruits and a dozen different vegetables suitable for grilling. [The recipes accommodate] a standard Weber grill with other equipment, including a plancha and a Dutch oven.”
—New York Times

“These are not the obligatory grilled vegetable sides on so many restaurant menus. . . . The recipes are inventive and elevated but simple at their core. And Mallmann includes some workarounds for cooking in different home kitchen setups (you know, just in case you don’t have a giant iron dome and an open firepit in your backyard). As long as you have beautiful produce and fire—and perhaps a bit of Mallmann’s poetic spirit—you can grill anything.”
—Goop

“Green Fire is every bit as educational as it is inspiring (we’d buy it for the gorgeous photography alone), with tips for coaxing the most flavor out of fruits and vegetables. Vegetarian cooking? Yes. A consolation prize for those who don’t eat meat? Hardly—this book proves that Mallmann’s expertise extends way beyond the realm of steak. . . .  Mallmann is a refreshingly approachable cook. Green Fire is full of actually-doable recipes and “a-ha!” moments that quietly boost home cooks’ confidence.”
—Spruce Eats

“Francis Mallmann has done it again. . . . [Green Fire] marries the world-renowned Argentinian chef’s techniques, creativity, instinct for bold flavors, and decades of experience to the idea of cooking vegetables and fruits over live fire.”
—Haute Living

“When we think of cooking with fire we automatically think of meat, of barbecue and pit masters. We tend ot overlook the rich history of plant-based cooking over the flame. Vegetables are transformed by fire, and Mallmann’s new book is a well-timed wealth of knowledge on the subject.”
—Fine Dining Lovers

“Inventive . . . . From smoldering to savory, this delivers on every level.”
—Publishers Weekly