The First World War: A Captivating Guide to World War 1, The Battle of Verdun and the Battle of Somme (Hardcover) 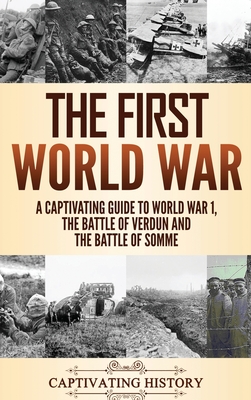 If you want to discover captivating stories of people and events of World War 1, then keep reading...

Three captivating manuscripts in one book:

The First World War was one of the most devastating conflicts in our history. The death toll was like nothing experienced before, and it is estimated that over 11 million soldiers were killed, wounded, or went missing, and many of those bodies have never been found.

Regardless of how people remember the First World War, and whether or not they romanticize the life of a soldier on the front lines, it is important that the world never forgets this brutal and bloody conflict.

The tumult and chaos that remained in the wake of the First World War had far-reaching and devastating consequences, not just for Europe and the survivors of the war, but for the entire world. The ruins of Europe provided a fertile breeding ground for fierce nationalism, which led to the rise of the Third Reich and allowed the evil of Adolf Hitler to go unchecked for far too long.

Some of the topics covered in part 1 of this book include:

Some of the topics covered in part 2 of this book include:

Some of the topics covered in part 3 of this book include:

So if you want to learn more about The First World War, scroll up and click the "add to cart" button