Desert Notebooks: A Road Map for the End of Time (Paperback) 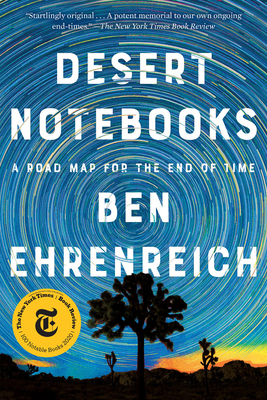 Ben Ehrenreich's unclassifiable, brilliant new book is a polymath's mix of personal memoir, nature writing, micro-histories, Mayan mythologies, and how it all relates to the (outgoing) American president, the acceleration of climate change, the politics of race, and the nature of time itself. It's a most unusual book, as you can tell, but one I can't seem to shake - and it's holding up as one of the best books I've read this year. Ehrenreich's general theory is that "Trauma stops time. Catastrophe breaks all cycles. Whatever rhythm had once been attained collapses." 2020 has definitely been such a massive, yearlong trauma point for most of us - whether racism, COVID, climate, Trump, or a heavy combination of all of the above. Now how do we deal with that trauma and move forward into the future? Through the desert, friends.  -sm

Layering climate science, mythologies, nature writing, and personal experiences, this New York Times Notable Book presents a stunning reckoning with our current moment and with the literal and figurative end of time.

Desert Notebooks examines how the unprecedented pace of destruction to our environment and an increasingly unstable geopolitical landscape have led us to the brink of a calamity greater than any humankind has confronted before. As inhabitants of the Anthropocene, what might some of our own histories tell us about how to confront apocalypse? And how might the geologies and ecologies of desert spaces inform how we see and act toward time—the pasts we have erased and paved over, this anxious present, the future we have no choice but to build? Ehrenreich draws on the stark grandeur of the desert to ask how we might reckon with the uncertainty that surrounds us and fight off the crises that have already begun.

In the canyons and oases of the Mojave and in Las Vegas’s neon apocalypse, Ehrenreich finds beauty, and even hope, surging up in the most unlikely places, from the most barren rocks, and the apparent emptiness of the sky. Desert Notebooks is a vital and necessary chronicle of our past and our present—unflinching, urgent—yet timeless and profound.

Ben Ehrenreich writes about climate change for The Nation. His work has appeared in Harper's Magazine, The New York Times Magazine, the London Review of Books, and Los Angeles magazine. In 2011, he was awarded a National Magazine Award. His last book, The Way to the Spring: Life and Death in Palestine, based on his reporting from the West Bank, was one of The Guardian's Best Books of 2016. He is also the author of two novels, Ether and The Suitors.

"Startlingly original . . . Out of love and despair (where else does art come from?), he has built a potent memorial to our own ongoing end-times." --William Atkins, The New York Times Book Review

"Writing from deserts across the Southwest--whose tenacious landscape is dotted with Army bases and urban outposts--he draws on Mayan creation myths, anthropological accounts of the decimated Sioux, and Presidential tweets to chronicle humankind's destructive nature. The breadth of reference lends perspective to our continuing struggle to achieve sustainability: as Ehrenreich writes, 'We are not the first people to believe we are living at the end of time.'" --The New Yorker

"In his timely new book, Desert Notebooks: A Road Map for the End of Time, a hybrid memoir, travelogue and metaphysical inquiry, Ben Ehrenreich explores how our perception of time changes in a crisis--a crisis like climate change, or COVID-19 . . . [He] fuses the personal with the political in reflections on climate change, the president's disaster du jour and his extensive reading in the desert." --Jim Ruland, Los Angeles Times

"Confessional, contemplative, intellectually adventurous, Ben Ehrenreich's Desert Notebooks: A Road Map for the End of Time is a worthy addition to the library of American aridity . . . Ehrenreich's intellectual explorations are challenging but never pretentious . . . [He] shows that deserts can make us wise in new ways." --Peter Fish, San Francisco Chronicle

"A book about the apocalypse shouldn't be uplifting; but somehow this book manages to be, while at the same time remaining very unflinching. Ehrenreich writes about a lot more than the desert in this book. He's weaving a tale for how we got here. But after you read it, you won't be able to stop thinking about where we are headed." --Chris Schluep, Amazon Book Review's Best Nonfiction of the Month

"A tapestry of aphorisms and personal essays, colonial history and ancient legends . . . Desert Notebooks is a searing indictment of the ascendance of white supremacy over more than 200 years and how the orthodoxy of capitalism has set us on a collision course with climate change." --Jonathan Hahn, Sierra

"Essential reading about the place and the rest of the world as it relates to it . . . The mix of science, myth, anecdotes, and a profound love for the terrain produces one of my favorite reads of the spring thus far, if not the year." --Chris La Tray, Buzzfeed

"Ehrenreich's good for a grand insight . . . With minimal exertion, he skips across far-distant geographies, cosmogonies, and temporalities, eyes peeled for the just-right detail, the flecks of cultural glue, and any mention whatsoever of his constant guide, the owl. When he makes a connection, it's for all of us." --Jason Kehe, Wired

"Desert Notebooks is a strong contender for my best book of the year. Author Ben Ehrenreich offers a profound and lyrical meditation on history, nature, myth, and our changing concepts of time against the backdrop of our ongoing political upheaval and a climate crisis that isn't going away." --Tom Beans, The Weekly Source

"A remarkable work of cultural history and environmental polemic, at once a stirring portrait of the desert in its purest form and a lament for what's been done to it in the name of progress." --Mark Athitakis, Inside Hook

"Ehrenreich is a bold choreographer, skipping from black holes and Mayan myths to the 'breathtaking racism' of Hegel and mystic wheels in the stories of Borges . . . He skips with intent, each apparently random insight sparking off the next . . . Engrossing." --Barbara Kiser, Los Angeles Review of Books

"An urgent plea to revise our relationship to the planet, each other, and time . . . Lyrical, freshly observed . . . Well-informed and -rendered, passionate reflections on humanity's prospects." --Kirkus Reviews (starred review)

"Exciting and illuminating . . . Very few writers have addressed the current planetary crisis as powerfully and insightfully as Ehrenreich does. The book is extraordinary as much for the rigor of its thinking as for the manner of its writing." --Amitav Ghosh