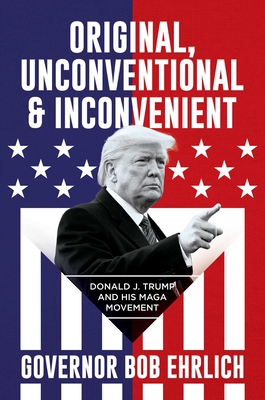 A month-by-month analysis of President Trump, his administration, and the “MAGA” movement’s impact on America.

Original, Unconventional & Inconvenient is an analysis of the Donald J. Trump administration and its impact on America’s culture, both party establishments, and a strong but bitterly divided nation.

The Trump years were so full of controversy that many observers failed to digest the meaning and impact of the “Make America Great Again” movement. Original, Unconventional & Inconvenient delves into the historic wake-up call that was the Trump administration—and how its leader popularized a uniquely American brand of 21st century populism.

Governor Robert L. Ehrlich is a graduate of Princeton University and Wake Forest University School of Law, and is a former governor of Maryland as well as a former United States congressman and state legislator.

He is the author of Turn This Car Around, America: Hope for Change, Turning Point, and Bet You Didn’t See That One Coming, in addition to columns and opinion pieces that have appeared in America’s leading newspapers and periodicals, including The Washington Examiner, The Washington Post, The Baltimore Sun, The Washington Times, The Weekly Standard, National Review, and Western Journal online.

Governor Ehrlich is counsel at the firm of King & Spalding in Washington, D.C., and lives with his wife, Kendel, and their children, Drew and Josh, in Annapolis, Maryland.

"Governor Ehrlich's latest is an insightful look at the successes and failures, triumphs and defeats of a very different political leader. You will come away with a better understanding of what the Trump Administration accomplished—and a sense of the array of opposition to his agenda and manner."
— Governor George Allen

"Governor Robert L. Ehrlich's writings on the Donald Trump era's political and rhetorical ups and downs are the most incisive and realistic of our times. Writing from a responsible conservative perspective, his analysis is unimpeded by ideological blinders, writing at one point, in summarizing the tremendous accomplishments of the administration as undermined by conflicts of Trump Republicanism, 'The establishment wants its party back...and Trump's ways certainly turned off many veteran Republicans.'"
— Richard E. Vatz, Ph.D., Professor, Towson University

"Ehrlich knows politics, he knows America, and he knows how things work both in D.C. and outside the Beltway, where the rest of us live. In his columns for the Western Journal, he has brought clarity—and a desperately needed civility—back to political discourse, without ever compromising his conservative values. If our nation still stands a century from now, it will be because of the thoughts, words, and deeds of Americans like Gov. Bob Ehrlich."
— George C. Upper III, Editor-in-Chief, The Western Journal

"Original, Unconventional, and Inconvenient is vintage Bob Ehrlich—insightful, powerful, and well-written. It's a must-read for anyone interested in better understanding Donald Trump, his movement, and its impact on our nation and politics."
— Charlie Gerow, Vice Chairman, American Conservative Union

"Bob Ehrlich knows politics—not just from books and articles, but from personal experience. From being out on the stump, and 'in the arena,' and in office. He has a lot to say, to Republicans, Democrats, and Americans at large."
— Jay Nordlinger, Senior Editor, National Review