To Live Deliberately: Where I Lived, and What I Lived For (Obvious State Classics Collection) (Paperback) 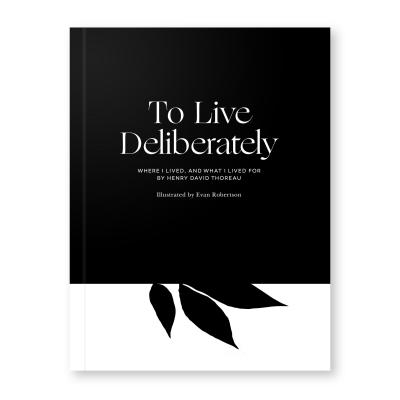 Henry David Thoreau dropped the gauntlet with Walden in 1854, and it is more relevant than ever.

To Live Deliberately is our visual reimagining of Thoreau's most well-known essay, Where I Lived and What I Lived For. Accompanied by 30 illustrations, the essay challenges the trappings of modern living and embraces an ascetic rejection of the material and the trivial in exchange for a reconnection with nature as a path toward self-discovery.

We judiciously edited Thoreau's essay to avoid any unnecessarily confusing news references, and were amazed to discover that not only does this manifesto otherwise hold up, but it also feels surprisingly modern and more relevant than ever. Thoreau's rejection of news as largely gossip, and the obsession with travel and railroads as idle self-indulgence, bear a sobering resemblance to our modern preoccupation with social media and internet surfing. In both instances, the impulse to seek distraction is the same.

Obvious State is a creative studio in pursuit of wisdom and beauty. They are inspired by provocative language that has stood the test of time, poetry that captures the beauty of the human experience, and philosophy that drives us to examine and re-examine. They aim to create art and thoughtfully designed gifts that prompt conversations and bring aesthetic joy to everyday objects. All Obvious State goods are meticulously crafted in the United States and printed on the finest papers and materials. After all, beautiful language deserves beautiful treatment.

Evan Robertson is the co-founder and sole artist behind Obvious State, a creative studio in pursuit of wisdom and beauty. Robertson's fascination with classic literature began with his study of humanities and classic theater at Yale, and continued at The Juilliard School. He spent many years in New York as a multi-discipline artist and actor, performing at The Public Theater, The Aquila, and The Pearl Theatre, where he won the Joe A. Calloway Award for his performance as Claudio in Shakespeare's Much Ado About Nothing. In 2011, his illustration work took center stage when he used snippets of underlined passages from his favorite books as inspiration for a visual interpretation. The personal project quickly grew into a small business, Obvious State, that garnered the attention of the press and design community alike.