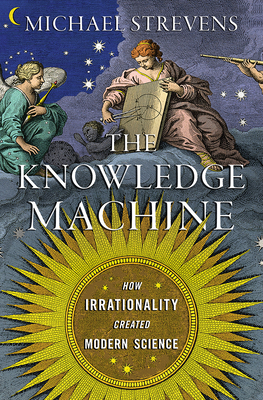 “The Knowledge Machine is the most stunningly illuminating book of the last several decades regarding the all-important scientific enterprise.” —Rebecca Newberger Goldstein, author of Plato at the Googleplex

A paradigm-shifting work, The Knowledge Machine revolutionizes our understanding of the origins and structure of science.

• Why is science so powerful?

• Why did it take so long—two thousand years after the invention of philosophy and mathematics—for the human race to start using science to learn the secrets of the universe?

In a groundbreaking work that blends science, philosophy, and history, leading philosopher of science Michael Strevens answers these challenging questions, showing how science came about only once thinkers stumbled upon the astonishing idea that scientific breakthroughs could be accomplished by breaking the rules of logical argument.

Like such classic works as Karl Popper’s The Logic of Scientific Discovery and Thomas Kuhn’s The Structure of Scientific Revolutions, The Knowledge Machine grapples with the meaning and origins of science, using a plethora of vivid historical examples to demonstrate that scientists willfully ignore religion, theoretical beauty, and even philosophy to embrace a constricted code of argument whose very narrowness channels unprecedented energy into empirical observation and experimentation. Strevens calls this scientific code the iron rule of explanation, and reveals the way in which the rule, precisely because it is unreasonably close-minded, overcomes individual prejudices to lead humanity inexorably toward the secrets of nature.

“With a mixture of philosophical and historical argument, and written in an engrossing style” (Alan Ryan), The Knowledge Machine provides captivating portraits of some of the greatest luminaries in science’s history, including Isaac Newton, the chief architect of modern science and its foundational theories of motion and gravitation; William Whewell, perhaps the greatest philosopher-scientist of the early nineteenth century; and Murray Gell-Mann, discoverer of the quark. Today, Strevens argues, in the face of threats from a changing climate and global pandemics, the idiosyncratic but highly effective scientific knowledge machine must be protected from politicians, commercial interests, and even scientists themselves who seek to open it up, to make it less narrow and more rational—and thus to undermine its devotedly empirical search for truth.

Rich with illuminating and often delightfully quirky illustrations, The Knowledge Machine, written in a winningly accessible style that belies the import of its revisionist and groundbreaking concepts, radically reframes much of what we thought we knew about the origins of the modern world.

Michael Strevens, a 2017 Guggenheim Fellow, is a professor of philosophy at New York University. He was born in New Zealand and has been writing about philosophy of science for twenty-five years. He lives in New York.

Riveting… Strevens promises his readers a better explanation of scientific progress than those given by his two illustrious predecessors, Karl Popper and Thomas Kuhn…[He] sustains his polemical fireworks with a steady succession of examples drawn from the history of science…Worth reading for the quality of Mr. Strevens’s prose alone, his crystal-clear, unfussy sentences, the crisp metaphors(comparing, say, an electron’s complex “superposition” in quantum mechanics to a cocktail mixed from many ingredients) and many excellent quips… As a hard-nosed, wonderfully timely plea for taking science seriously, for allowing scientists to do their work without interference, The Knowledge Machine is unparalleled.

A provocative and fascinating book.... Strevens’s book contains a number of surprises, including an elegant section on quantum mechanics that coolly demonstrates why it’s such an effective theory.... Ambitious.... Strevens builds on the work of philosophers like Karl Popper and Thomas Kuhn to come up with his own original hypothesis about the advent of modern science and its formidable consequences.
— Jennifer Szalai - New York Times

Strevens shows scientists exerting themselves intellectually.... [and] aims to identify that special something.
— Joshua Rothman - The New Yorker

One of the better examinations of the origins of the scientific revolution.
— Kirkus Reviews

[Strevens], an NYU philosophy professor, takes a scholarly look at how modern science arose with this erudite study. . . . For readers curious about why science works as well as it does, Strevens provides a convincing answer.
— Publishers Weekly

The Knowledge Machine is the most stunningly illuminating book of the last several decades regarding the all-important scientific enterprise.

— Rebecca Newberger Goldstein, author of Plato at the Googleplex

Michael Strevens is one of the leading philosophers of science at work today, so I knew this book would be powerful, bracingly argued, and important. What I did not expect was that it would be such a rollicking good read.
— Jim Holt, author of Why Does the World Exist?

Strevens treats us to fascinating episodes in the history of science, wittily and illuminatingly recounted, and to beautifully lucid and accessible accounts of the underlying philosophical issues. A rare achievement, it is entertaining and edifying all at once.
— Paul Boghossian, Silver Professor of philosophy, New York University

A book as thrilling to read as it is important. . . . To move through The Knowledge Machine is to have one’s assumptions about evidence-based inquiry challenged in captivating fashion; I read it in a trance of delight.

As with Kuhn’s Structure of Scientific Revolutions, its brevity and simplicity cannot conceal the boldness of its conception, the extraordinary scope of its ambition. It is a very important, perhaps even a great book.

— David Wootton, author of The Invention of Science

A delight to read. . . . The Knowledge Machine is richly illustrated with wonderfully told, easy-to-understand incidents from the history of natural science.

In this beautifully written, accessible, and often entertaining book, Michael Strevens takes up the serious task of accounting for the success of science, and why it took so long to achieve it.
— Philip Kitcher, Columbia University

There could hardly be a better introduction to the philosophy of science than The Knowledge Machine.

— Alan Ryan, author of On Politics

A stylish and accessible investigation into the nature of the scientific method.
— Nigel Warburton - Philosophy Times

Without the benefits of science, everyday life would be almost medieval. Michael Strevens pulls off the ambitious task of revealing how science really works as he defends the power and effectiveness of the scientific method to reveal the true nature of things against those who deny it very existence. The Knowledge Machine is an engaging must-read if you want to find out what’s so special about science.

It is easy to take science for granted, but in truth it is a peculiar institution that is absent from most of human history. Michael Strevens puts his finger on its essential core—a self-denying rejection of any reasoning that does not trade in new observational evidence—and shows how this ‘iron rule’ explains both why science is strange and why it is successful. Strevens wears his learning lightly, but this elegant book takes us to the heart of the scientific enterprise.
— David Papineau, King’s College London, author of Knowing the Score