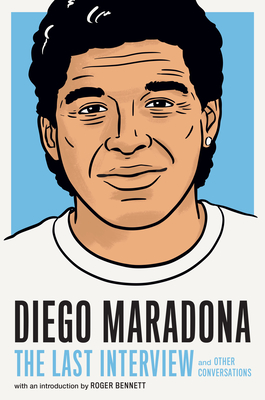 A series of provocative, moving and illuminating interviews with (arguably) the greatest soccer player ever...

Diego Armando Maradona’s death on November 25, 2020, at the age of 60, was a death that had been foretold many times. Even when he was alive accounts of his  life had a tragic register, of the kid from the slums whose magical talent on the soccer field was squandered by drug addiction.

But his death allowed millions of people to ponder both the tragedy and triumph of his life, of a man who was arguably the world’s greatest soccer player, who was also a champion for the world’s poor. Adorned in the talismanic number 10 shirt that Maradona made his own while playing Boca Juniors, Barcelona, Napoli and Argentina, hundreds of thousands flocked to the presidential palace in Buenos Aires to pay their last respects; millions around the world were similarly moved, creating makeshift altars and murals in his honor.  Vatican News called him “soccer’s poet.”

The interviews collected in Diego Maradona: The Last Interview span the breadth of his life and career as a player, coach, and public figure, providing a panoramic and extremely candid accounting of his rollercoaster life, many translated into English for the first time.  Included in the book are encounters with Pele and Gary Lineker, who Maradona played against in the 1986 England-Argentina game that sent shockwaves around the world. The book also features his reflections on his  stuggles with drug addiction, the highs and low of his experience playing for Napoli, his strong views on Lionel Messi,  the governance of world soccer, and his worries about the impact of Covid on the world's poor.

Maradona: The Last Interview is a fitting tribute to a complicated and brilliant soccer player who moved the world and changed the game of soccer forever.

Introduction by Roger Bennett, the co-host of Peacock's Men in Blazers show

Diego Armando Maradona 30 October 1960 – 25 November 2020) was an Argentine professional football player and manager. Widely regarded as one of the greatest players in the history of the sport, he was one of the two joint winners of the FIFA Player of the 20th Century award.

Roger Bennett (Introduction) is the founder of the Men In Blazers Media Network, which has become one of the most listened-to football platforms in the world. Rog hosts a slew of podcasts covering multiple leagues in the Men's and Women's game. His television show, Men In Blazers, appears on NBC's Peacock. He created the No. 1 podcast series “American Fiasco” with WNYC Studios, and HBO's Succession and Band of Brothers Podcasts. He is also the author of Reborn in the USA: An Englishman's Love Letter to His Chosen Home, which debuted at #1 on the New York Times Best Seller List.