The Fruit of All My Grief: Lives in the Shadows of the American Dream (Paperback) 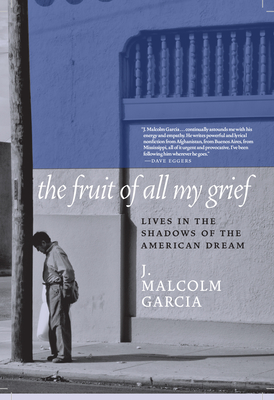 Like the Russian author Svetlana Alexievich, award-winning journalist J. Malcolm Garcia lets the people he writes about speak for themselves. His writing highlights the struggles and the dignity of people quietly fighting for their lives. They include families and small businesses still recovering from the BP oil spill; the man sentenced to life in prison for transporting drugs to pay for the medical care that would save his son’s life; the widows of soldiers who died, not in war, but from toxic fumes they were exposed to at their bases overseas; the Iraqi interpreter who was promised American asylum, only to arrive and be forced to live in poverty. The soaring narratives told in The Fruit of All My Grief let us feel the fears, hopes, and outrage of those living in the shadows of the American Dream.

J. Malcolm Garcia is the author of The Khaarijee: A Chronicle of Friendship and War in Kabul (Beacon 2009), What Wars Leave Behind: The Faceless and the Forgotten (University of Missouri Press 2014), Without a Country: The Untold Story of America’s Deported Veterans (Skyhorse Press 2017), and Riding through Katrina with the Red Baron’s Ghost: A Memoir of Friendship, Family and a Life Writing Stories (Skyhorse Press 2018). Garcia is a recipient of the Studs Terkel Prize for writing about the working classes and the Sigma Delta Chi Award for excellence in journalism. His work has been anthologized in Best American Travel Writing, Best American Nonrequired Reading, and Best American Essays.

"Studs Terkel Prize–winning journalist Garcia tells 11 stories about people harmed by corporations, judges, and governments, with deep empathy and incredible attention ... Garcia respectfully presents the realities his subjects are facing from their own perspectives, and he has a gift for polishing the story of a life until its heart shines through. This humane, urgent work will move readers." —Publishers Weekly (starred review)

"Compassionate, memorable tales from a journalist who understands the significance of revealing the inner lives of marginalized individuals." —Kirkus Reviews

"Garcia delves into the inner lives of his subjects, channeling each person’s distinctive voice, unfiltered. We can hope the fruit of all this grief, now shared, will evoke not just outrage but also empathy and compassion." —Plough Quarterly (editors' Pick)

"I’ve used essays from The Fruit of All My Grief as required reading in my narrative long-form writing class. I urge students to do what J. Malcolm Garcia does here so brilliantly: he listens to the voices of real people and then he channels their collective hopes and desires, their struggle against what John Steinbeck called the 'marching phalanx' arrayed against them. Others write about Wall Street. Then there’s Malcolm’s Street—the back alleys and shuttered storefronts of the inner city, the suburbs with their hidden desperation, the forgotten rural towns. In other words, the 99 percent of America." —Dale Maharidge, Pulitzer Prize-winning author of And Their Children After Them

"[T]here’s a writer named J. Malcolm Garcia who continually astounds me with his energy and empathy. He writes powerful and lyrical nonfiction from Afghanistan, from Buenos Aires, from Mississippi, all of it urgent and provocative. I’ve been following him wherever he goes."
—Dave Eggers