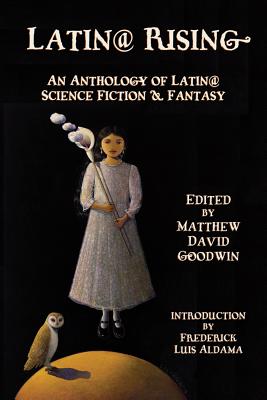 By Matthew David Goodwin (Editor), Frederick Luis Aldama (Introduction by)
Email or call for price.
Out of Print

Latin@ Rising is the first anthology of science fiction and fantasy written by Latinos/as living in the United States. The 22 authors and artists included in this anthology come from all over the U.S. and from eight different national traditions. They include well-known creators like Kathleen Alcalá, Pablo Brescia, Sabrina Vourvoulias, Ana Castillo, Junot Díaz, Richie Narvaez, Giannina Braschi, and Daniel José Older; they also include new voices, well worth hearing. The book gives an overview to the field of Latino/a speculative, showing the great variety of stories being told by Latino/a writers. Fifty years ago the Latin American "Boom" introduced magical realism to the world; Latin@ Rising is the literature that has risen from the explosion that gave us García Márquez, Jorge Amado, Carlos Fuentes and others. The 21st century writers and artists of Latin@ Rising help us to imagine a Latino/a past, present, and future which have not been whitewashed by mainstream perspectives. Contrary to the popular perception, Latino/a Literature is not just magical realism and social realist protest literature—it also contains much speculative fiction. By showing the actual breadth of genres being used by Latino/a authors, Latin@ Rising will help extend the boundaries of the Latino/a literature canon. Latin@ Rising demonstrates the value of speculative fiction for the Latino/a community: it gives Latinos/as a vital means for imagining a past and a future in which they play a pivotal role, and it constitutes a narrative of the effects of technology on the Latino/a community. The book shows how the richness of the speculative genres provide U.S. Latinos/as with a unique medium to discuss issues of colonialism, migration, and the experience of being bicultural.

Matthew David Goodwin is an Assistant Professor in English at the University of Puerto Rico in Cayey. His work is centered on the topic of migration in Latino/a literature. In particular, he looks at the ways that science fiction, fantasy, and digital culture have been used to express the experience of migration. He completed his PhD in Comparative Literature at the University of Massachusetts–Amherst in 2013. He has published a number of essays on Latino/a speculative fiction for journals. Frederick Luis Aldama is University Distinguished Scholar as well as Arts & Humanities Distinguished Professor of English, Spanish and Portuguese, at Ohio State University where he is also founder and director of the White House Bright Spot Awarded LASER (Latino & Latin American Space for Enrichment & Research) that creates a pipeline for Latinos from 9th grade through graduate and professional school education. He specializes in Latino and Latin American literature, comic books, and film—and pop culture generally.

"Matthew D. Goodwin has assembled a dynamic team of creative heavy-hitting intellects to tackle the provocative synthesis of Latino expressivity with Science Fiction and Fantasy literature. Enjoy and savor this collection of writers as they push and pull at the conventional tropes of style and content concerning magical realism, mythology and technology. The result is an incisive and entertaining book that not only challenges the intellect but expands the imagination." —Adilifu Nama, Loyola Marymount University, author

"Authors of Latino descent mix literary elements with science fiction and fantasy in this eloquent anthology of intimate pieces, with the speculative elements often serving as background, support, or mirror . . . . There is a feeling of melancholy to many of these pieces, and others, such as 'Monstro' by Junot Díaz and 'The Drain' by Alejandra Sanchez, can best be described as horror. Urban fantasy readers will particularly enjoy 'Red Feather and Bone' by Daniel José Older, a tie-in to his Bone Street Rumba series . . . . [A] solid anthology." —Publishers Weekly

"There’s a decidedly east coast and Caribbean lurch to the settings and characters, but for the most part decidedly raza. Gente will see themselves in these stories. Characters have brown skin, speak some Spanish or as in Junot Diaz’ story, get a hard time from friends for not speaking good Spanish, engage in word-play mixing languages. They have names like Mictan (not Mictlán but close), Jesús, Gordo (two of them, one in Ana Castillo’s New Mexico-set story and Older’s), and Paco. These are 'latina/o' stories as a result of character, setting, language, and writer. One thing the collection is not is an insider’s fiction. It’s highly accessible while providing intimate insights about the way these writers, and writers like these, see the world. For the most part, Latina/o Rising will keep any reader interested just because these are worthwhile, good stories." —Em Sedano, labloga.blogspot.com

"if you have a teen who reads and studies Latino literature, this is a must-have. The diverse voices and writing styles represented help young readers to explore literature and introduce them to the limitless imaginations of writers. Best of all, it shows that the Latino experience can be expressed in any genre; there is no limit on authors and illustrators. And likewise, your child's culture goes with her no matter where her interests lie." —Monica Olivera, mommymaestra.com

"Latino writers of speculative fiction have grown increasingly visible in the fields of science fiction, fantasy, and horror. Now, for the first time, a representative cross-section of their work has been collected into a single volume: Latin@ Rising: An Anthology of Latin@ Science Fiction & Fantasy, released in January by Wings Press . . . . As a starting point for the serious exploration and study of speculative fiction as it flows from the pen of Latino writers, this volume has much to recommend it. It’s also one hell of a ride." —David Bowles, McAllen Monitor

"Now Wings has made history by publishing the first-ever anthology of science fiction and fantasy by Latinos in America, Latin@ Rising. The 24 stories and poems in this nuanced and timely collection all seek to foreground brown voices . . . . It is certainly fair to call Latin@ Rising, a book that explores identity while delighting in dreams, a speculative success." —Roberto Ontiveros, Texas Observer

"The stories range in length from flash fiction to almost novelette length, plus a few poems and something akin to a photo-essay, so there’s something for every attention span. The authors are male and female, straight and queer (various values thereof). There’s science fiction and fantasy and magical realism and some stories that don’t fit neatly into any one category. Many are rooted in our real world or variations of same, some take place farther afield. I highly recommend checking out Latin@ Rising. The variety of voices, all grounded in what is unique and shared about the Latin@ experience, is well worth listening to." —Anthony R. Cardno, anthonycardno.com

"Goodwin makes good on his promise to deliver a collection of thought-provoking works that challenge the expectation that Latin@ science fiction and fantasy writing doesn't stray far from Latin American magical realism. The genre's literary lineage is also American, influenced by such sci-fi writers as Isaac Asimov, Octavia Butler and Ursula K. LeGuin. The anthology is uniquely Latin@ in that its locations are expansive, taking place not only north of the border but in the Caribbean and Europe, engaging such issues as exile, identity, and migration but with innovative and futuristic premises." —Rigoberto Gonzalez, nbcnews.com