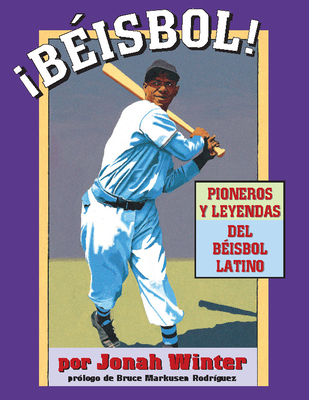 In Spanish. Learn about fourteen legendary Latino baseball players in this fascinating and colorfully written collection.

Baseball, known as America's favorite pastime, is a favorite sport in Latin America as well. In this fascinating and colorfully written collection of profiles, author/illustrator Jonah Winter -- following the success of FAIR BALL , his earlier book on the Negro Leagues -- gives us a guide to Latino heroes, including little known pioneers of the sport.

Readers learn stats and anecdotes about fourteen players including Dolf Luque, the Cuban pitcher who became the first Latin American star in the major leagues; Roberto Clemente, the legendary Puerto Rican outfielder of the 1950s and 1960s; and Felipe Alou, the first full-time Dominican star in the majors who later became the first Latin American Manager of the Year. Each profile is accompanied by a stunning portrait rendered to resemble traditional baseball cards. Translated from Beisbol Latino Baseball Pioneers and Legends, B isbol Pioneros y leyandas del b isbol Latino recalls the drama of Latin American stars with all the color, grit, and style that should now be part of U.S. baseball history.

Bruce Markusen Rodr guez (introduction) has been associated with the National Baseball Hall of Fame and Museum since 1995, first as a senior researcher and now as Manager of Program Presentations. He is also the author of numerous articles and books about baseball, including ROBERTO CLEMENTE: THE GREAT ONE and THE ORLANDO CEPEDA STORY. He and his wife live in Cooperstown, New York.

Jonah Winter is the author/illustrator of several picture book biographies, including Roberto Clemente: Pride Of The Pittsburgh Pirates, You Never Heard Of Willie Mays?!, and You Never Heard Of Sandy Koufax?!. His other books for children include Fair Ball!: 14 Great Stars From Baseball's Negro Leagues, a SMITHSONIAN Notable Book for Children, and two collaborations with his mother, Jeanette Winter, Diego, a Reading Rainbow book, and Once Upon A Time In Chicago: The Story Of Benny Goodman. Winter lives in Pittsburgh, Pennsylvania with his wife. This is his first book for Lee & Low.