Inspiring Stories of Sportsmanship (Count on Me: Sports) (Paperback) 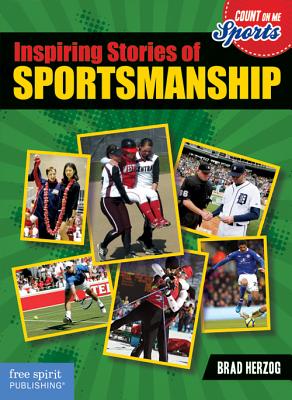 By Brad Herzog
Email or call for price.
Out of Print

Teach kids about positive character through real-life examples. Sportsmanship goes beyond a single game. It shines through in all these stories, including the actions of college softball player Mallory Holtman, who helped an injured opponent, and of German track star Luz Long, who befriended Jesse Owens—in front of Hitler—at the 1936 Berlin Olympics.

The Count on Me: Sports series is a collection of dramatic tales of character in action, bringing together exciting sports history, real-life examples of sports and character building, and lively storytelling. Each book features twenty true stories of athletic challenge, triumph, and sometimes heartbreak. All the books explore a wide variety of sports, with historical and contemporary episodes featuring male and female athletes from around the world.

Brad Herzog is the author of more than 30 books for children, including more than two dozen sports books. He has also published three travel memoirs and a fourth book for adults, The Sports 100, which ranks and profiles the 100 most important people in U.S. sports history. For his freelance magazine writing (including Sports Illustrated and Sports Illustrated for Kids), Brad has won three gold medals from the Council for Advancement and Support of Education. Brad travels all over the country visiting schools as a guest author. He lives on California’s Monterey Peninsula with his wife and two sons.

“As shown by the wonderful stories in the Count on Me: Sports series, athletics can not only reveal character, but also inspire it.” —Shannon Miller, two-time Olympic gold medalist

"I was a professional football player for fifteen seasons, but by far my most important job is being the father of two sports-loving daughters. The true tales in Brad Herzog's books show how the games we play can teach seriously important life lessons to kids."—Jake Delhomme, former Super Bowl quarterback for the Carolina Panthers

“As a longtime coach of amateur and professional athletes, I know that sports is about far more than winning and losing. It is about character and courage. It is about doing the right thing, even in the heat of the moment. The Count on Me: Sports series celebrates sportsmen and sportswomen who are role models—not only as athletes, but as human beings.”—Dave Sarachan, MLS associate head coach of the Los Angeles Galaxy