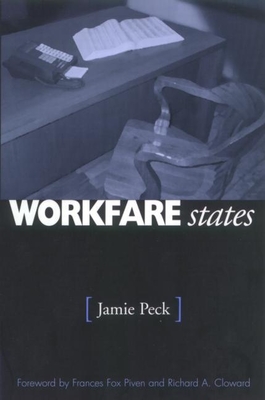 This book examines the political economy of workfare, the umbrella term for welfare-to-work initiatives that have been steadily gaining ground since candidate Bill Clinton's 1992 promise to "end welfare as we know it." Peck traces the development, diffusion, and implementation of workfare policies in the United States, and their export to Canada and the United Kingdom. He explores how reforms have been shaped by labor markets and political conditions, how gender and race come into play, and how local programs fit into the broader context of neoliberal economics and globalization. The book cogently demonstrates that workfare rarely involves large-scale job creation, but is more concerned with deterring welfare claims and necessitating the acceptance of low-paying, unstable jobs. Integrating labor market theory, critical policy analysis, and extensive field research, Peck exposes the limitations of workfare policies and points toward more equitable alternatives.

Jamie Peck is Professor of Geography at the University of Wisconsin/n-/Madison, having previously worked for more than 10 years at the University of Manchester, England. He is the author of Work-Place: The Social Regulation of Labor Markets, and has published widely on issues relating to economic restructuring, employment policy, urban political economy, and theories of regulation and governance. Since the early 1980s, Jamie Peck has also been involved in policy research and advocacy in the areas of job-training strategies, local economic development, and measures to combat unemployment. His future plans include work on contingent labor and the restructuring of low-wage labor markets in U.S. cities.

"This is a path-breaking study of welfare restructuring by a radical scholar of international repute. Peck offers a thorough, well grounded, and politically committed critique of the origins, the discourses, the general strategic line, the local variations, the policy turnover, the failures, and the sorry consequences of the current workfare offensive in the United States. He is equally devastating on attempts to develop workfare states in Canada and Britain. He concludes by calling for the reform of work to replace punitive treatment of those without it." --Bob Jessop, Professor of Sociology, Lancaster University, UK

"In Workfare States, Peck maps out the complex political geography of the shift from welfare to workfare. He traces workfare as a political and ideological project, from its origins in 'welfare to work' experiments starting in the Reagan years, to the radical U.S. welfare legislation of 1996, and then to the creation of a new global regulatory model that is already reshaping welfare in Canada, the UK and beyond. Peck is a lucid and reliable guide, and his account is indispensable for understanding the new politics of welfare." --Fred Block, Department of Sociology, University of California at Davis

"Peck is the most important intellectual writing about workfare today. No one else writes with such penetrating insight and clarity. Analytically rigorous, yet accessible to the nonexpert reader, this book is an important contribution for anyone who wishes to understand workfare, its current trajectory, and possible futures. In addition to scholars and students, it will be an invaluable resource for those of us confronting workfare on the front lines." --Andrew Mitchell, Workfare Watch Project, Community Social Planning Council of Toronto, Ontario, Canada