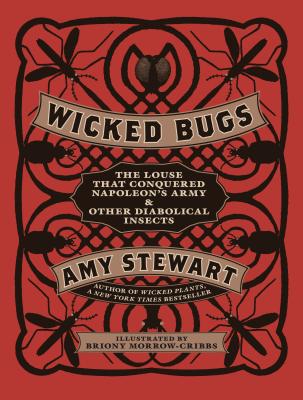 In this darkly comical look at the sinister side of our relationship with the natural world, Stewart has tracked down over one hundred of our worst entomological foes—creatures that infest, infect, and generally wreak havoc on human affairs. From the world’s most painful hornet, to the flies that transmit deadly diseases, to millipedes that stop traffic, to the “bookworms” that devour libraries, to the Japanese beetles munching on your roses, Wicked Bugs delves into the extraordinary powers of six- and eight-legged creatures.

With wit, style, and exacting research, Stewart has uncovered the most terrifying and titillating stories of bugs gone wild. It’s an A to Z of insect enemies, interspersed with sections that explore bugs with kinky sex lives (“She’s Just Not That Into You”), creatures lurking in the cupboard (“Fear No Weevil”), insects eating your tomatoes (“Gardener’s Dirty Dozen”), and phobias that feed our (sometimes) irrational responses to bugs (“Have No Fear”).

Intricate and strangely beautiful etchings and drawings by Briony Morrow-Cribbs capture diabolical bugs of all shapes and sizes in this mixture of history, science, murder, and intrigue that begins—but doesn’t end—in your own backyard.

Amy Stewart is the award-winning author of six books on the perils and pleasures of the natural world. She is the cofounder of the popular blog Garden Rant and is a contributing editor at Fine Gardening magazine. She and her husband live in Eureka, California, where they own an antiquarian bookstore called Eureka Books.

“A fascinatingly dark look at the world of wonders that buzzes, burrows and reproduces all around us... Stewart's research is prodigious and her writing precise, whether she's telling the tale of a caterpillar that looks like a tiny Persian cat or more about fleas than you ever wanted to know. Read this book and you'll always keep your gardening gloves on...Stewart concentrates on scarily diabolical bugs, to great effect.”—Seattle Times
—Entertainment Weekly

“If you’ve got an insect phobia, this probably isn’t the book for you. But if not, dig in, as Stewart gleefully archives more than 100 of earth’s creepiest crawlies.”—Entertainment Weekly
—Smithsonian.com

“There is a ton of well-researched, fascinating information with terrific and terrifying stories from history ... As Stewart writes, ‘we are seriously outnumbered.’ It’s best we know our enemies.”—Smithsonian.com

“There are a number of interesting tidbits in this book, you know, things that you might want to work into a conversation.”—Linda Wertheimer, NPR’s “Weekend Edition”
—NPR's "Fresh Air"

“From bat bugs — yes, bat bugs — to banana slugs to the pork tapeworm, [Stewart] details the most infectious, most terrifying insects on the planet.”—NPR’s “Fresh Air”

“I read your book, and I'm all itchy.”—Dave Davies,NPR’s “Fresh Air”

“A word of warning: Some of the descriptions ahead might trigger your gag reflex.”—Terry Gross, NPR’s “Fresh Air”

“Stewart offers witty capsule biographies of dozens of chitin horrors, from the African bat bug to the tsetse fly, with plenty of shout-out for the spiders who haunt our nightmares, including such familiars as black widows and brown recluses.” - Milwaukee Journal Sentinel
—The New York Times

"Wicked Bugsdefines bug in the amateur sense — that is, anything creepy-crawly, including worms, snails, slugs and other insects that are not, technically speaking, bugs. A true bug, Ms. Stewart acknowledges, has six legs and wings, like all insects, as well as piercing and sucking mouthparts. And wicked, she makes clear, lies in the eye of the beholder, whether you’re a Roman with scorpions falling into your eyes or a Marylander with stink bugs falling into your hair... Wicked Bugs has some good tips for gardeners, like putting out rolled-up newspaper or cardboard tubes at night to trap earwigs and dumping them into soapy water in the morning... In fact, no bug is truly wicked. It is just eating.”—New York Times
—Kirkus Reviews

“[Wicked Bugs] is not a comprehensive field guide but a smorgasbord of facts—ranging from horrible, painful or otherwise discomfiting—about bugs... Stewart’s prose is simple and to the point. She lets the little horrors she describes work in the reader’s imagination without any hyperbolic help from her. Guaranteed to cause sympathy itching and other discomfort.”—Kirkus Reviews
—Washington Post

“This book covers many of the gross, frightening, disgusting, and awful things that bugs can do to you. And it’s COOL ... Bugs become less gross, and a lot more interesting, when put into the context of how they have changed human history.”—Scientific American blog —Knoxville News-Sentinel

“I should have known it would gross me out, in a deliciously creepy kind of way. It's everything you didn't know you didn't want to know about insects…” – Knoxville News-Sentinel —The Oregonian

“[Stewart] wrote this book to scare the bugs out of you…Stewart is not an entomologist, but she is a consummate storyteller with a curious mind.” – The Oregonian