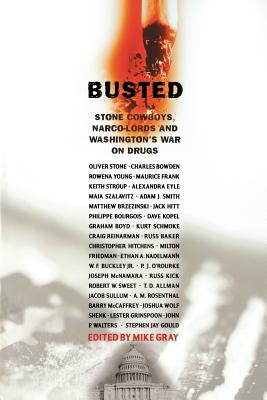 Thirty years ago Richard Nixon called drugs "the modern curse of youth" and launched the modern "War on Drugs" as we know it. Thirty years later, even the conservative National Review has said, "The War on Drugs has failed." Spanning three decades, Busted tells readers why, charting the violence, chaos, and corruption that the War on Drugs has spawned. It includes frontline reporting from all over the world, literary journalism, public records, and provocative commentary from the left and right. P. J. O'Rourke writes, "Marijuana never kicks down your door in the middle of the night. Marijuana never locks up sick and dying people, does not suppress medical research, does not peek in bedroom windows . . . Prohibition has done far more harm to far more people than marijuana ever could." And Christopher Hitchens has charged that the drug war involves "a demented overseas entanglement, with off-the-record U.S. military aircraft running shady missions over Colombia and Peru, and high-level collaboration with ruthless and unaccountable 'Special Forces.' Colombia doesn't look any more like the U.S. as a result, but the U.S. does look a lot more like Colombia." From the crack dens of South Central L.A. to Iran Contra, from Nancy Reagan's "Just Say No" to Plan Columbia, here is a collection of the most provocative, dissenting writing on the drug wars. Contributors include Gore Vidal, Alexander Cockburn, William Buckley Jr., Milton Friedman, Gary Webb, Gabriel Garcia Marquez, Andrew and Leslie Cockburn, and a jailhouse interview with General Manuel Noriega by Oliver Stone.

Mike Gray is the author of Drug Crazy and the screenwriter of The China Syndrome. He has produced the award-winning documentaries American Revolution and The Murder of Fred Hampton. Gray has written for the Nation, the Los Angeles Times, and Rolling Stone. He is the chair of Common Sense for a Drug Policy, a D.C.-based pressure group.