Brother Bill: President Clinton and the Politics of Race and Class (Paperback) 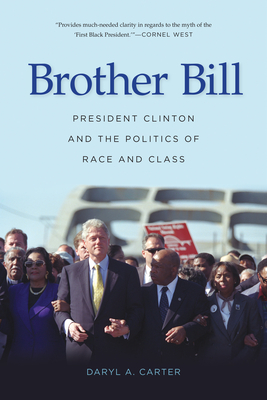 “This book is a fascinating analysis of race and class in the age of President Bill Clinton. It provides much-needed clarity in regards to the myth of the ‘First Black President.’ It contributes much to our understanding of the history that informs our present moment!”
—Cornel West

As President Barack Obama was sworn into office on January 20, 2009, the United States was abuzz with talk of the first African American president. At this historic moment, one man standing on the inaugural platform, seemingly a relic of the past, had actually been called by the moniker the “first black president” for years.

President William Jefferson Clinton had long enjoyed the support of African Americans during his political career, but the man from Hope also had a complex and tenuous relationship with this faction of his political base. Clinton stood at the nexus of intense political battles between conservatives’ demands for a return to the past and African Americans’ demands for change and fuller equality. He also struggled with the class dynamics dividing the American electorate, especially African Americans. Those with financial means seized newfound opportunities to go to college, enter the professions, pursue entrepreneurial ambitions, and engage in mainstream politics, while those without financial means were essentially left behind. The former became key to Clinton’s political success as he skillfully negotiated the African American class structure while at the same time maintaining the support of white Americans. The results were tremendously positive for some African Americans. For others, the Clinton presidency was devastating.

Brother Bill examines President Clinton’s political relationship with African Americans and illuminates the nuances of race and class at the end of the twentieth century, an era of technological, political, and social upheaval.

“This book is a fascinating analysis of race and class in the age of President Bill Clinton. It provides much-needed clarity in regards to the myth of the ‘First Black President.’ It contributes much to our understanding of the history that informs our present moment!”
—Cornel West

“Race had everything to do with the steady rise of the Republican Party after the 1964 election, and during Clinton’s remaking of the Democratic Party he often tweaked the party’s positions in a direction meant to bring white voters back into the fold. Daryl Carter’s Brother Bill is a long, patient recitation of these efforts. … Carter writes in a deliberately measured, even sweet-natured voice that puts his account at a far remove tonally from, say, Michelle Alexander’s The New Jim Crow or Ava DuVernay’s documentary film 13th. He gives Clinton credit for saving affirmative action at a time when it was under severe attack, as it isn’t now. He reminds us that the crime and welfare bills Clinton signed had strong black support in polls at the time and that many black members of Congress voted for both; today, black voters, especially younger ones, are far more critical of these measures.”

“In Brother Bill, historian Daryl A. Carter digs deep into the hot-button racial issues of the 1990s to interrogate popular conceptions of Bill Clinton as the first “black” president. Not surprisingly, Carter unearths a complicated relationship between African Americans and the Clinton agenda. Class, rather than race, motivated many of the president’s actions. Eager to maintain support from white moderates, Clinton promoted policies that benefited the middle class—including the growing black middle class—while ignoring or even harming the African American underclass. … Carter demonstrates a solid grasp of his subject matter and has made good use of an array of primary and secondary sources ranging from government reports to contemporary news articles to recent historical and sociological writings. A handful of oral histories lend his discussion a personal flair. His insistence that historians of recent America must do a better job of untangling the complex interplay between class and race is a highlight of Brother Bill.”

“Daryl Carter’s Brother Bill is the place to begin if you want to understand why a president whose signature domestic reforms devastated inner-city black neighborhoods continues to be immensely popular among African Americans. His thesis—that Clinton’s popularity rests largely on his close ties to a black elite that has increasingly distanced itself from poor and working-class African Americans—is bound to be controversial, but no one interested in recent American history can ignore this important and insightful book.”

“[Carter] offers scholars of both U.S. and black politics new insights that challenge contemporary narratives about race and politics in twenty-first-century America. … this is an important book. As an opening salvo of historical analysis of the Clinton years, Carter has done an admirable job.”
—Joshua D. Farrington, The Register of the Kentucky Historical Society, Winter 2018

“Overall, Brother Bill is an extremely well-written and documented book that uses a solid combination of primary and secondary sources. The book addresses Carter’s goals to dispel the myth of a monolithic black community and show the sophisticated and rapidly changing ideas in America, while making sense of the often-perplexing Clinton presidency and his most loyal constituency, the African American community.”
—Henry T. Brownlee Jr., The Journal of African American History, September 2019