Scams!: Ten Stories That Explore Some of the Most Outrageous Swindlers and Tricksters of All Time (Paperback) 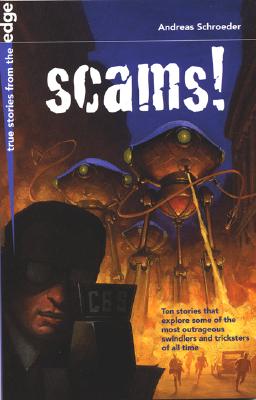 "Ten of the biggest scams in history."

When a tribe of natives who lived for centuries with no outside contact was discovered in the Philippines in 1971, the world was captivated. Media and scientists flocked to the Tasadays' village and the story held the public's attention for more than a decade. Then two journalists dropped in on the village unannounced. What they found unearthed one of the most elaborate scams of the 20th century.

Scams reveals ten true tales of tremendous trickery that will mesmerize young readers. They will learn how Donald Crowhurst almost won the first-ever round-the-world yacht race -- without ever leaving the Atlantic. They will witness the hysteria that swept the United States when Orson Welles used on-the-scene reports of Martian attacks to add realism to his radio play "The War of the Worlds."

They will discover how the Germans planned to destroy the British economy during World War II by flooding the world with millions of fake British banknotes.

Readers will be enthralled by these stories of trickery exposed, where the strange twists and turns truly test the limits of credulity.

Andreas Schroeder has been a full-time writer for over thirty years. His fiction, non-fiction, radio dramas, journalism, translations and criticism have appeared in over 200 publications. His titles for adults include "Fakes, Frauds, and Flimflammery" and "Cheats, Charlatans, and Chicanery." Scams! is his first book for young readers.