A Field Guide to Insects of the Pacific Northwest (Paperback) 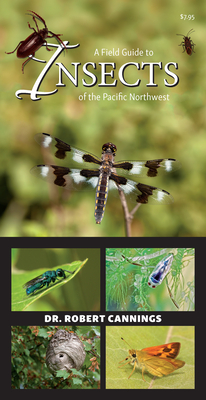 Insects are all around us, from the butterflies in our gardens to the mosquitoes in the woods. About 80 percent of the 1.5 million named species of animals on earth are insects. Without flower-loving bees, wasps, flies and beetles, most crops and wild plants would not be pollinated and would disappear.

But insect diversity is largely invisible because most insects are small and difficult to recognize and identify. They are often easy to ignore.

A Field Guide to Insects of the Pacific Northwest is a durable, water-resistant eight-fold field guide that describes more than sixty of the most common species that are likely to be encountered in the many habitats of the Pacific Northwest. Full-colour macro photos of specimens in their natural habitats accompany handy descriptions with information on specific species’ anatomy, identification and importance in the ecosystem. Readers will be fascinated by interesting (and occasionally gruesome) facts about the insect inhabitants of the Pacific Northwest—for instance that the robber fly injects its insect prey with a fluid that dissolves muscles and organs before sucking their prey dry like a milkshake.

The species in A Field Guide to Insects of the Pacific Northwest have been expertly chosen to introduce the diversity of insect life while also being accessible to novice bug enthusiasts. Most species shown are common but not necessarily familiar. The selection represents nineteen major groups, or orders. The largest are Coleoptera (beetles), Diptera (true flies), Hymenoptera (wasps, bees and relatives) and Lepidoptera (moths and butterflies). These groups are broken down into smaller families, such as scarab beetles or sphinx moths.

A Field Guide to Insects of the Pacific Northwest showcases the amazing diversity of insects that the region holds, and will encourage curious readers to learn a little about the main groups of insects and the intriguing details about their lives.

Dr. Robert Cannings is Curator Emeritus of Entomology at the Royal British Columbia Museum (RBCM) in Victoria, BC. He’s been crazy about insects since he was a kid. Although he’s studied many kinds of insects, his favourites are dragonflies and robber flies, and he has written several books on them. Before joining the RBCM in 1980, Rob was a biologist for BC Parks and a lecturer and museum curator at the University of BC.