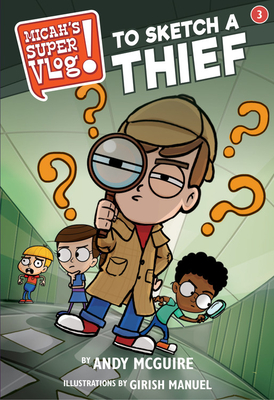 By Andy McGuire, Girish Manuel (With)
$6.99
Out of stock. Available to order.

In the third book of the Micah's Super Vlog series based on JellyTelly's popular animated web show, Micah and his friends learn the importance of honesty and of believing the best about each other.

When Armin's sketchbook, Lydia's lunch, and Micah's shoes go missing at school, will the gang turn against each other before discovering the truth?

Based on the popular JellyTelly show, Micah's Super Vlog, in book three of this series things mysteriously go missing at school. Accusations fly and friendships are put on the line. Faced with the struggle, can Micah and his friends learn to believe the best about each other, and work together to uncover who (or what) is really to blame?

Andy McGuire has written and illustrated four children's books, including Remy the Rhino and Rainy Day Games. He has a B.A. in Creative Writing from Miami University and an M.A. in Literature from Ohio University. Andy's writing heroes have always been the ones who make him laugh, from Roald Dahl and Louis Sachar to P.G. Wodehouse and William Goldman. Andy lives with his wife and three children in Burnsville, MN.

Girish Manuel is the creator of the Micah's Super Vlog video series and a producer at Square One World Media. He lives in a little place called Winnipeg, Canada with his lovely wife, Nikki, and furry cat, Paska. Girish enjoys running and drawing... but not at the same time. That would be hard. He tried it once and got ink all over his shoes.