Frankly, We Did Win This Election: The Inside Story of How Trump Lost (Paperback) 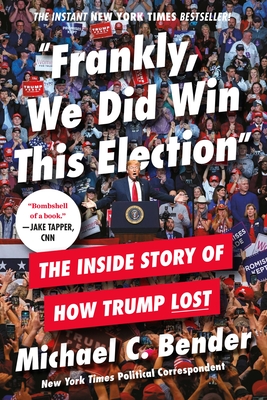 Michael C. Bender, senior White House reporter for the Wall Street Journal, presents a deeply reported account of the 2020 presidential campaign that details how Donald J. Trump became the first incumbent in three decades to lose reelection—and the only one whose defeat culminated in a violent insurrection.

Beginning with President Trump’s first impeachment and ending with his second, FRANKLY, WE DID WIN THIS ELECTION chronicles the inside-the-room deliberations between Trump and his campaign team as they opened 2020 with a sleek political operation built to harness a surge of momentum from a bullish economy, a unified Republican Party, and a string of domestic and foreign policy successes—only to watch everything unravel when fortunes suddenly turned.

With first-rate sourcing cultivated from five years of covering Trump in the White House and both of his campaigns, Bender brings readers inside the Oval Office, aboard Air Force One, and into the front row of the movement’s signature mega-rallies for the story of an epic election-year convergence of COVID, economic collapse, and civil rights upheaval—and an unorthodox president’s attempt to battle it all.

Fresh interviews with Trump, key campaign advisers, and senior administration officials are paired with an exclusive collection of internal campaign memos, emails, and text messages for scores of never-before-reported details about the campaign.

FRANKLY, WE DID WIN THIS ELECTION is the inside story of how Trump lost, and the definitive account of his final year in office that draws a straight line from the president’s repeated insistence that he would never lose to the deadly storming of the U.S. Capitol that imperiled one of his most loyal lieutenants—his own vice president.

MICHAEL C. BENDERis the senior White House reporter for the Wall Street Journal whose coverage of President Trump has been recognized for its deep sourcing, balance, and valuable behind-the-scenes portraits of Trump’s administration and presidential campaigns. Bender was awarded the Gerald R. Ford Foundation Journalism Prize for Distinguished Reporting on the Presidency in 2019 for work that “set a consistently high standard of reporting” and “provided a valuable chronicle of the president, his team, and the movement that has reshaped American politics and national policy.” In 2020, he received the National Press Club award for political analysis for a series of stories that detailed the sights, sounds, and inner workings of Trump campaign rallies. Since 2000, Bender has covered local, state, and national politics for the Daily Sentinel in Grand Junction, Colorado, Dayton Daily News, Palm Beach Post, Tampa Bay Times, and Bloomberg News. He joined the Journal in 2016 and published more than eleven hundred stories about Trump in the next five years. He has also served as an on-air political analyst for CNN. Born and raised in Cleveland with his six younger sisters, Bender graduated from the Ohio State University in 2000 with a degree in history and now lives in Washington with his wife, Washington Post White House bureau chief Ashley Parker, and their two daughters.

“Bombshell of a book.”—Jake Tapper, CNN

“Belongs with the best of a rising group of Washington reporters.” —Bob Woodward, The Washington Post

"Well-written and well-informed. [Bender] captures both the infighting in Trump's world and the surrounding social tectonics."—Lloyd Green, The Guardian

“He's set the highest standards for the rest of us to follow."—Peter Baker, co-author of THE MAN WHO RAN WASHINGTON

“This book came out and pointed out…things that were more ugly than we thought.”—Mia Love (R-UT), former congresswoman

“He’s one of the tough ones, but such beautiful hair.”—Donald J. Trump, 45th president of the United States

“Bender debuts with an immersive, blow-by-blow rundown...he paints a credible portrait...he enriches the narrative with a sharp sense of humor...Political junkies will gobble this one up.”—Publishers Weekly

"Deep reporting and solid sources who spoke with really extraordinary candor. The book...struck me so hard with its wonderful narrative thread on Trump's supporters. I loved this book."—Peggy Noonan, winner of the 2017 Pulitzer Prize for Commentary, former speechwriter for President Ronald Reagan, and columnist for The Wall Street Journal

"Incredibly engrossing—one of many reasons to buy this book. It's an important book for history, but it's also a big bowl of candy."—John Heilemann, co-author of GAME CHANGE, producer/co-star of Showtime's The Circus, host of Hell & High Water podcast

"Interesting to see how there was such back-biting and competition behind the scenes with the people closest to Trump...It was very competitive and very nasty."—Gayle King, CBS This Morning

"One of the premiere chroniclers of the Trump White House."—Maggie Haberman, New York Times correspondent, winner of the 2018 Pulitzer Prize for national reporting

"An immensely compelling read…impossible to put down. I would strongly recommend this book.”—Charlie Sykes, founder of The Bulwark, former contributing editor to the Weekly Standard

"A very interesting book—it has a lot of great nuggets. I’ve always respected (Bender's) ability to report from inside the Trump administration.”—Bret Baier, Fox News anchor

"The book really puts us inside the room. I felt like a fly on the wall in Air Force One when the president was looking at the George Floyd video for the first time."—Adriana Diaz, CBS News national correspondent

"The former president told his chief of staff he believed Adolf Hitler 'did a lot of good things'; Trump wanted to 'execute' whoever leaked that he went down to the White House bunker due to the Black Lives Matter protests outside; Trump was more severely ill with Covid than the White House acknowledged; Trump viewed himself as a wartime president in how we wanted to respond to the protesters; Chairman of the Joint Chiefs of Staff General Mark Milley told Trump aide Stephen Miller to 'shut the f*** up' when Miller falsely said cities in America were burning because of those protesters; and certifying the 2020 presidential election wasn't the only time apparently that Mike Pence stood up to Trump...All of this is all from just one book!"—Mehdi Hasan, MSNBC host