The House by the Lake: The True Story of a House, Its History, and the Four Families Who Made It Home (Hardcover) 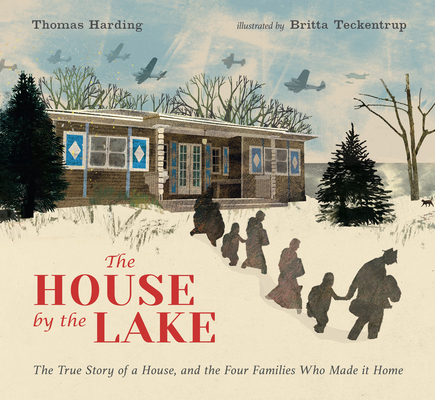 History comes home in a deeply moving, exquisitely illustrated tale of a small house, taken by the Nazis, that harbors a succession of families—and becomes a quiet witness to a tumultuous century.

The days went around like a wheel.
The sun rose, warming the walls of the house.

On the outskirts of Berlin, Germany, a wooden cottage stands on the shore of a lake. Over the course of a hundred years, this little house played host to a kind Jewish doctor and his family, a successful Nazi composer, wartime refugees, and a secret-police informant. During that time, as a world war came and went and the Berlin Wall arose just a stone’s throw from the back door, the house filled up with myriad everyday moments. And when that time was over, and the dwelling was empty and derelict, the great-grandson of the man who built the house felt compelled to bring it back to life and listen to the story it had to tell. Illuminated by Britta Teckentrup’s magnificent illustrations, Thomas Harding’s narration reads like a haunting fairy tale—a lyrical picture-book rendering of the story he first shared in an acclaimed personal history for adult readers.

Thomas Harding is an author and journalist who has written for the Financial Times, The Sunday Times (London), the Washington Post, and the Guardian, among other publications. He cofounded a television station in Oxford, England, and for many years was an award-winning documentary maker. He also ran a local newspaper in West Virginia before moving back to England, where he lives with his family.

Britta Teckentrup's strikingly beautiful picture books have been published in more than twenty countries, and her work has been short-listed for the Kate Greenaway Medal. Her books with Candlewick include Fish Everywhere, Where’s the Baby?, One Is Not a Pair, and Don’t Wake Up the Tiger. Born in Hamburg, she now lives with her family in Berlin, Germany.

Ethereal collages by Teckentrup (My Little Book of Big Questions) capture the house’s clean lines; the light-filled summer foliage around it; and the grim, gray tones of war. Younger readers unfamiliar with the history of WWII and 20th-century Germany can meet them here at a safe, albeit uncontextualized, distance.
—Publishers Weekly

In this picture book rendition of Harding’s 2015 adult memoir, a house near Berlin, built in the twentieth century, becomes home to four families over the years...the house setting that brings them together is an interesting and useful lens for learning more about the day-to-day lives of people from this historical era, and this title could be an interesting partner to Karas’ As an Oak Tree Grows (12/14).
—Bulletin of the Center for Children's Books