Love from A to Z (Paperback) 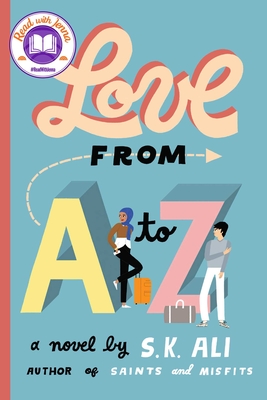 From William C. Morris Award Finalist S.K. Ali comes an unforgettable romance that is The Sun Is Also a Star meets Anna and the French Kiss, following two Muslim teens who meet during a spring break trip.

A marvel: something you find amazing. Even ordinary-amazing. Like potatoes—because they make French fries happen. Like the perfect fries Adam and his mom used to make together.

An oddity: whatever gives you pause. Like the fact that there are hateful people in the world. Like Zayneb’s teacher, who won’t stop reminding the class how “bad” Muslims are.

But Zayneb, the only Muslim in class, isn’t bad. She’s angry.

When she gets suspended for confronting her teacher, and he begins investigating her activist friends, Zayneb heads to her aunt’s house in Doha, Qatar, for an early start to spring break.

Fueled by the guilt of getting her friends in trouble, she resolves to try out a newer, “nicer” version of herself in a place where no one knows her.

Then her path crosses with Adam’s.

Since he got diagnosed with multiple sclerosis in November, Adam’s stopped going to classes, intent, instead, on perfecting the making of things. Intent on keeping the memory of his mom alive for his little sister.

Adam’s also intent on keeping his diagnosis a secret from his grieving father.

Alone, Adam and Zayneb are playing roles for others, keeping their real thoughts locked away in their journals.

Until a marvel and an oddity occurs…

S. K. Ali is the author of Saints and Misfits, a finalist for the American Library Association’s 2018 William C. Morris Award and the winner of the APALA Honor Award and Middle East Book Honor Award; and Love from A to Z, a Today show Read with Jenna Book Club selection. Both novels were named best YA books of the year by various media including Entertainment Weekly and Kirkus Reviews. She is also the author of Misfit in Love and Love from Mecca to Medina. You can find Sajidah online at SKAliBooks.com and follow her on Instagram @SKAliBooks, TikTok @SKAliBooks, and on Twitter at @SajidahWrites.

This book gave me butterflies. Love From A to Z is the bighearted, wildly charming, painfully real love story I’ve been waiting for.
— Becky Albertalli, New York Times bestselling author of Simon Vs The Homo Sapiens Agenda

What makes Zayneb and Adam different is not their faith but their ability to learn from and love one another in a world hurling obstacles their way...Heartfelt and powerful.
— Kirkus Reviews, Starred

Heartfelt, honest, and featuring characters readers will fall in love with, this is sure to become a beloved book for many.
— School Library Journal, Starred

In Love from A to Z, S.K. Ali once again takes an unflinching and moving look at the intricacies of life as a Muslim teen in an imperfect, multi-cultural world. Beautiful.
— Shelf Awareness, Starred

Love From A to Z ends up being a compulsively readable, beautifully romantic look at how fate can intervene when we might just need it the most.
— EW.com

This is a beautiful, complex, and important book. I hope that all libraries will get this on their shelves and on display. A wonderful story that centers the Muslim experience and shows the power of anger, peace, and connection.
— SLJ Teen Librarian Toolbox

[Adam and Zayneb] are exceptionally appealing as their well-integrated faith leads them in different ways to seek peace, justice, and each other.
— BCCB