The Mosquito: A Human History of Our Deadliest Predator (Hardcover) 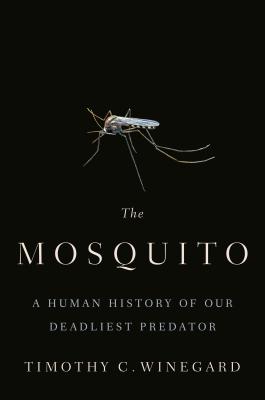 Finalist for the Lane Anderson Award

Finalist for the RBC Taylor Award

A pioneering and groundbreaking work of narrative nonfiction that offers a dramatic new perspective on the history of humankind, showing how through millennia, the mosquito has been the single most powerful force in determining humanity’s fate

Why was gin and tonic the cocktail of choice for British colonists in India and Africa? What does Starbucks have to thank for its global domination? What has protected the lives of popes for millennia? Why did Scotland surrender its sovereignty to England? What was George Washington's secret weapon during the American Revolution?

The answer to all these questions, and many more, is the mosquito.

Across our planet since the dawn of humankind, this nefarious pest, roughly the size and weight of a grape seed, has been at the frontlines of history as the grim reaper, the harvester of human populations, and the ultimate agent of historical change. As the mosquito transformed the landscapes of civilization, humans were unwittingly required to respond to its piercing impact and universal projection of power.

The mosquito has determined the fates of empires and nations, razed and crippled economies, and decided the outcome of pivotal wars, killing nearly half of humanity along the way. She (only females bite) has dispatched an estimated 52 billion people from a total of 108 billion throughout our relatively brief existence. As the greatest purveyor of extermination we have ever known, she has played a greater role in shaping our human story than any other living thing with which we share our global village.

Imagine for a moment a world without deadly mosquitoes, or any mosquitoes, for that matter? Our history and the world we know, or think we know, would be completely unrecognizable.

Driven by surprising insights and fast-paced storytelling, The Mosquito is the extraordinary untold story of the mosquito’s reign through human history and her indelible impact on our modern world order.

Dr. Timothy C. Winegard holds a PhD from the University of Oxford and is a professor of history and political science at Colorado Mesa University in Grand Junction, Colorado. Winegard served as an officer with the Canadian and British Forces, has lectured on CSPAN, and has appeared on televised roundtables. He is internationally published, including his four previous books, in the fields of both military history and indigenous studies.

Finalist for the RBC Taylor Prize for nonfiction

Finalist for the Lane Anderson Award

Praise for The Mosquito
“Hugely impressive, a major work.”—NPR

“The Mosquito is an extremely well-researched work of narrative nonfiction. . . . Timothy C. Winegard's The Mosquito is as wildly entertaining as any epic narrative out there. It's also all true. . . . Winegard masterfully weaves historical facts and science to offer a shocking, informative narrative that shows how who we are today is directly linked to the mosquito.”—NPR.org

“A fascinating account.”—Centers for Disease Control and Prevention

“Winegard’s reminder of their enormous potential for destruction is a timely one for all of us. . . . We modern folk are also guilty of believing that our hopes and our technology will somehow make us exempt from the workings of the natural world. The entire time that humanity has been in existence, the mosquito has been proof that we are not.”—The New Yorker

“It’s not guns, germs, and steel here—it’s all germs. The Mosquito is one of those (compound-) eye-opening books that permanently shifts your worldview. . . . Those who crave a deep dive into one world-shaking bug should grab The Mosquito.”—Sam Kean, New York Times Book Review

“It’s an ambitious book that aims to deliver a tour of Western military history from antiquity to the jungles of Vietnam—and an account of how one tiny arthropod repeatedly molded that history, thwarting generals, sickening peasants and popes, and killing billions of people. Timothy C. Winegard has pulled off this feat in his enthusiastic if imperfect The Mosquito: A Human History of Our Deadliest Predator. . . . Mr. Winegard presents a convincing argument for that assertion in 470 pages that will be illuminating for the reader coming fresh to mosquito-borne diseases.”—The Wall Street Journal

“Thrilling . . . A lively history of mosquitoes. Mr. Winegard convincingly argues that the insect has shaped human life as well as delivering death. . . . Mr. Winegard is an engaging guide, especially when he combines analysis with anecdote.”—The Economist

“Readers of nonfiction, history, and science will enjoy Winegard's unique take on the ever-present pest. If you can't get away from mosquitoes in your backyard, then immerse yourself in this book and learn a new perspective on this seemingly insignificant part of summer.”—Associated Press

“Written as a big-picture, impersonal history—think Jared Diamond's Guns, Germs, and Steel . . . The Mosquito serves up an eye-opening, deeply alarming, and absolutely engrossing view of humanity’s most tenacious foe.”—Foreign Policy

“Fascinating . . . An entertainingly educational new opus . . . Winegard’s study marshals scientific facts and millennia of historical background about the droning pest we all encounter and which has killed nearly half of all human beings who’ve ever lived, profoundly altering our world along its bloodsucking way.”—USA Today

"Magisterial."—Soutik Biswas, the India correspondent and features and analysis editor for BBC News

“[The Mosquito] takes readers on a riveting adventure, documenting the mosquito’s outsized role in conflict since antiquity. . . . Winegard’s earnest voice on this brings the seriousness of research and action on the mosquito up to the needed decibel.”—Nature

“In what might be the bones of a good future horror movie, Timothy C. Winegard’s The Mosquito . . . goes deep into the history of that one particular bug. . . . [The Mosquito] is a reminder that the human and insect worlds are interconnected and fragile . . . that we’re not the most important thing in the natural world.”—Outside.com

"Book of the Week."—The Week

“With the deeply researched Mosquito . . . he uses the bellicose insect to tie together a fascinating, sprawling history—from dinosaurs to the banned insecticide DDT.”—Literary Review of Canada

“Convincingly portrays the ignoble mosquito as a malignant force more influential in human affairs than the legendary Illuminati.”—Natural History Magazine

“Certainly, history buffs and science lovers will enjoy this book but it’s also a heavier-duty, gee-whiz tale that’s totally absorbing. If you’re ready to learn, look for The Mosquito. You know the drill.”—The Quad-City Times

“Timothy Winegard’s entertaining new book, The Mosquito, chronicles the impact of mosquito-borne disease, principally malaria, throughout history. Readers of this book will no doubt enjoy Winegard’s rapid journey through many of humanity’s major population movements, campaigns, and wars.”—Science Magazine

“Fascinating . . . The Mosquito traces the defeat of armies, birth of nations, and shaping of culture all at the hand—or wings—of the mosquito.”—Garden&Gun

"One of Fall 2019's Biggest Books . . . Winegard is a great storyteller who makes the icky fascinating."—The Philadelphia Inquirer

"The amount of knowledge that Winegard has provided is more than enough to be taken seriously, and he provides a detailed history of the world that was probably not focused on in history class."—San Francisco Book Review (five-star review)

"A combination of well-researched incredible scientific facts and enthusiastic, imaginative narrative, The Mosquito is a fascinating and important book, both educational and entertaining."—Ft. Myers Magazine