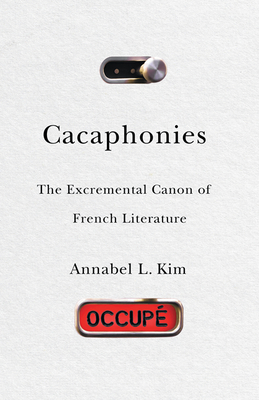 Cacaphonies takes fecal matter and its place in literature seriously. Readers and critics have too long overlooked excrement’s vital role in the twentieth- and twenty-first-century French canon. In a stark challenge to the tendency to view this literature through sanitizing abstractions, Annabel L. Kim undertakes close readings of key authors to argue for feces as a figure of radical equality, both a literary object and a reflection on literature itself, without which literary studies is impoverished and sterile.

Following the fecal through line in works by Céline, Beckett, Genet, Sartre, Duras, and Gary and the contemporary authors Anne Garréta and Daniel Pennac, Kim shows that shit, far from vanishing from the canon after the early modern period, remains present in the modern and contemporary French literature that follows. She argues that all the shit in the canon expresses a call to democratize literature, making literature for all, just as shit is for (or of) all. She attends to its presence in this prized element of French identity, treating it as a continually uttered desire to manifest the universality France aspires to—as encapsulated by the slogan Liberté, égalité, fraternité—but fails to realize. In shit there is a concrete universalism that traverses bodies with disregard for embodied differences.

Cacaphonies reminds us that literature, and the ideas to be found therein, cannot be separated from the corporeal envelopes that create and receive them. In so doing, it reveals the aesthetic, political, and ethical potential of shit and its capacity to transform literature and life.

Annabel L. Kim is associate professor in the Department of Romance Languages and Literatures at Harvard University. She is author of Unbecoming Language: Anti-Identitarian French Feminist Fictions.

"In dazzling readings of classic French texts, Annabel L. Kim reclaims feces as literary matter. Sidestepping familiar psychoanalytic frames, Kim turns excrement into a force for democracy. From Céline to Duras to Garréta, this caca communism blows up our old ways of thinking. Irreverent and erudite, as funny as Rabelais, Cacaphonies is a genuine scatological pleasure!"—Lynne Huffer, Emory University

"We tend to assume that the trajectory of modern literature repeats that of society and technology (urbanization, sanitation, dematerialization, sanitization, deodorization) in taking us ever further away from the excretory body. It does not, insists Annabel L. Kim. On the contrary, modern literature refuses to endorse the fantasy of being ‘free from or clear of shit.’ Thus, to turn to the excretory body in literary works is to ask what literature’s deepest understanding of the human is, and what literature itself is. Cacaphonies is an extraordinarily engaging project: insightful, serious, self-consciously ‘profane,’ metacritically alive."—Thangam Ravindranathan, author of Behold an Animal: Four Exorbitant Readings