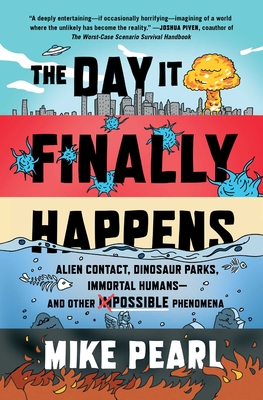 From a VICE magazine columnist, “a deeply entertaining—if occasionally horrifying” (Joshua Piven, coauthor of The Worst-Case Scenario Survival Handbook) look at how humanity is likely to weather such happenings as nuclear war, a global internet collapse, antibiotics shortages, and even immortality.

If you live on planet Earth you’re probably scared of the future. How could you not be? Some of the world’s most stable democracies are looking pretty shaky. Technology is invading personal relationships and taking over jobs. Relations among the three superpowers—the US, China, and Russia—are growing more complicated and dangerous. A person watching the news has to wonder: is it safe to go out there or not?

Taking inspiration from his virally popular VICE column “How Scared Should I Be?,” Mike Pearl games out many of the “could it really happen?” scenarios we’ve all speculated about, assigning a probability rating, and taking us through how it would unfold. He explores what would likely occur in dozens of possible scenarios—among them the final failure of antibiotics, the loss of the world’s marine life, a complete ban on guns in the US, and even contact with extraterrestrial life—and reports back from the future, providing a clear picture of how the world would look, feel, and even smell in each of these instances.

For fans of such bestsellers as What If? and The Worst Case Scenario Survival Handbook, The Day It Finally Happens is about taking future events that we don’t really understand and getting to know them in close detail. Pearl’s “well-researched speculations induce daydreams and nightmares and mark [him] as one of his generation’s most interesting writers” (Alec Ross, New York Times bestselling author).

Mike Pearl is a Webby Award–winning journalist whose writing has appeared in The Awl, The Hollywood Reporter, Grist, and Death and Taxes, and his columns “How Scared Should I Be?,” “Climate 2050 Predictions,” and “Hours and Minutes” have been featured in VICE. A graduate of Chapman University, he is based in Los Angeles, California. The Day It Finally Happens is his first book.

“This book is full of surprises…With a wry, conversational, and matter-of-fact style, Pearl delves into the practicalities of potential futures and reassures readers that—one way or another—humankind can survive.”
—Booklist

“I was floored by the detail in this survey of looming doom.”
—John Roderick, host of the Omnibus Project Podcast, an apocalypse primer

“Alternately reassuring and hair-raising.”
—David Feldman, author of Why Do Clocks Run Clockwise? and Why Do Fish Sleep?

“Think Woody Allen meets Alvin Toffler… I came away from The Day It Finally Happens bubbling with new information, and hopeful—but not certain—of a better future.”
—Charles Panati, former science editor of Newsweek and author of Panati’s Extraordinary Endings of Practically Everything and Everybody

“Pearl is the ideal tour guide to what lies ahead.”
—Brian Merchant, nationally bestselling author of The One Device: The Secret History of the iPhone

“The Day It Finally Happens got my brain buzzing with stories that bring together fantasy and reality. The well-researched speculations induce daydreams and nightmares and mark Mike Pearl as one of his generation’s most interesting writers.”
—Alec Ross, New York Times bestselling author of The Industries of the Future

“A deeply entertaining—if occasionally horrifying—imagining of a world where the unlikely has become the reality.”
—Joshua Piven, coauthor of international bestseller The Worst-Case Scenario Survival Handbook