Prisoners of Geography: Ten Maps That Explain Everything About the World (Politics of Place #1) (Paperback) 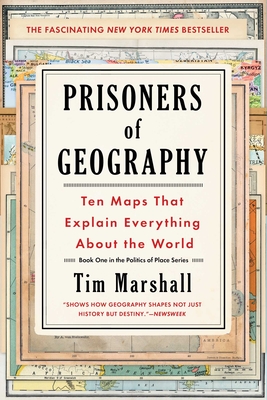 This is book number 1 in the Politics of Place series.

In this New York Times bestseller, an award-winning journalist uses ten maps of crucial regions to explain the geo-political strategies of the world powers—“fans of geography, history, and politics (and maps) will be enthralled” (Fort Worth Star-Telegram).

Maps have a mysterious hold over us. Whether ancient, crumbling parchments or generated by Google, maps tell us things we want to know, not only about our current location or where we are going but about the world in general. And yet, when it comes to geo-politics, much of what we are told is generated by analysts and other experts who have neglected to refer to a map of the place in question.

All leaders of nations are constrained by geography. In “one of the best books about geopolitics” (The Evening Standard), now updated to include 2016 geopolitical developments, journalist Tim Marshall examines Russia, China, the US, Latin America, the Middle East, Africa, Europe, Japan, Korea, and Greenland and the Arctic—their weather, seas, mountains, rivers, deserts, and borders—to provide a context often missing from our political reportage: how the physical characteristics of these countries affect their strengths and vulnerabilities and the decisions made by their leaders.

Offering “a fresh way of looking at maps” (The New York Times Book Review), Marshall explains the complex geo-political strategies that shape the globe. Why is Putin so obsessed with Crimea? Why was the US destined to become a global superpower? Why does China’s power base continue to expand? Why is Tibet destined to lose its autonomy? Why will Europe never be united? The answers are geographical. “In an ever more complex, chaotic, and interlinked world, Prisoners of Geography is a concise and useful primer on geopolitics” (Newsweek) and a critical guide to one of the major determining factors in world affairs.

Tim Marshall is a leading authority on foreign affairs with more than thirty years of reporting experience. He was diplomatic editor at Sky News and before that worked for the BBC and LBC/IRN radio. He has reported from forty countries and covered conflicts in Croatia, Bosnia, Macedonia, Kosovo, Afghanistan, Iraq, Lebanon, Syria, and Israel. He is the author of Prisoners of Geography: Ten Maps That Explain Everything About the World; The Age of Walls: How Barriers Between Nations Are Changing Our World; and A Flag Worth Dying For: The Power and Politics of National Symbols. He is founder and editor of the current affairs site TheWhatandtheWhy.com.

"Quite simply, one of the best books about geopolitics you could imagine: reading it is like having a light shone on your understanding."
— The Evening Standard

"In an ever more complex,chaotic and interlinked world, Prisoners of Geography is a concise and useful primer on geo-politics.”
— Newsweek Europe

"Marshall is excellent on some of the highways and byways of geopolitics."
— Financial Times

“This is not a book about environmental determinism – the geography of aregion is never presented as fatalistic; but it does send a timely reminderthat despite technological advances, geography is always there, often forcingthe hand of world leaders.”
— Geographical Magazine

"Fans of geography, history and politics (and maps) will be enthralled."
— Fort Worth Star-Telegram

"Lively and perceptive political and historical analyses are frequent. The chapter on China is excellent; the chapter on Africa combines geography and history in a convincing way; the chapter on Western Europe...is a brilliant narrative of European relations,particularly between France and Germany. The superb chapter on the Middle East makes for a clear indictment of the Sykes–Picot agreements and of their tracing of artificial borders. The chapter on the Arctic is precise and informative ...A very lively, sensible and informative series of country reports in which geography occupies its rightful place along with shrewd historical reminders and political judgments."
— Survival: Global Politics and Strategy

"Marshall's insistence on seeing the world through the lens of geography compels a fresh way of looking at maps—not just as objects for orientation or works of art, but as guideposts to the often thorny relations between nations.”
— New York Times Book Review

"This book is especially timely...Landscapes, rugged or otherwise, and what the land holds in resources, exert their own kind of sway that no one, not even a Putin, can surmount. This book grabbed me because of its enormous relevance to our world today."
— Booktrib.com